The meeting, headed by Prime Minister Narendra Modi, decided to extend the PM-KISAN scheme to all farmers, benefitting all 15 crore ryots in the country at a cost of Rs 87,000 crore a year.

NEW DELHI: The new government at the Centre hit the ground running by calling a Cabinet meeting on its first full day in the office and announcing relief to the distressed farm sector.

The meeting, headed by Prime Minister Narendra Modi, decided to extend the PM-KISAN scheme to all farmers, benefitting all 15 crore ryots in the country at a cost of Rs 87,000 crore a year.

In another major move, the Cabinet cleared a pension scheme that could benefit around 3 crore traders.
The Centre had announced PM-KISAN in the interim Budget 2019-20.

As per the original plan, Rs 6,000 each was to be paid to 12 crore small and marginal farmers holding cultivable land of up to two hectares a year in three instalments through DBT.

The scheme was introduced retrospectively from December 1, 2018, and the first installment was handed over to farmers in February.

The Cabinet also approved a new central sector scheme called the Pradhan Mantri Kisan Pension Yojana, which is a voluntary and contributory pension scheme for small and marginal farmers across the country.

“The central government will contribute to the pension fund in equal amount as contributed by the farmer,” Agriculture  Minister Narendra Singh Tomar said. The scheme could cost the exchequer around Rs 10,000.

“The scheme provides income support to small and marginal landholder farmer families with cultivable land holding up to 2 hectares, across the country, by way of Rs 6,000 per year. The ongoing scheme aims to cover around 12.5 crore families,” he added.

Why the dole makes sense

The latest GDP data show that the agricultural sector growth plunged to 2.9% in FY19 against 5% in FY18. It could become worse if monsoon turns out to be poor. The scheme can support farmers’ income and boost rural consumption 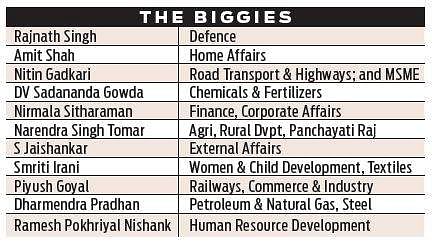 Now we are on Telegram too. Follow us for updates
TAGS
Narendra Modi PM Modi NDA BJP PM-KISAN