India could soon have indigenously produced antidote to Nipah virus, a deadly disease that has hit Kerala second time in a row this year.

NEW DELHI: India could soon have indigenously produced antidote to Nipah virus, a deadly disease that has hit Kerala second time in a row this year. The drug, however, is likely to be available for treatment only from next year in case of further outbreaks. Country’s top health research agency, Indian Medical Research Council, has asked an Indian vaccine and pharmaceutical manufacturer, Serum Institute of India, to manufacture the experimental monoclonal antibody for compassionate use during any future outbreaks of Nipah in India or other neighbouring countries. 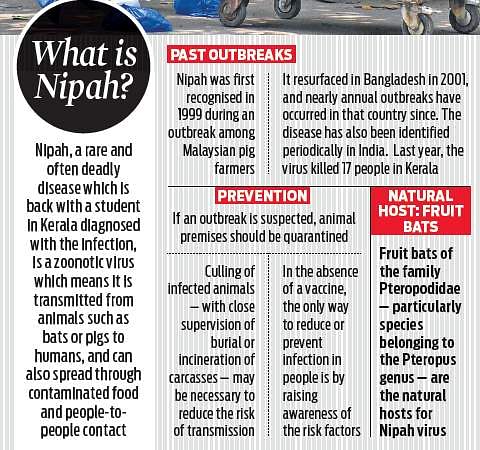 The council had obtained the MAB from Australia last year during Kerala’s 2018 Nipah outbreak, but it could not be used as the vials arrived only in the first week of June — a few days after the last case of the disease was reported. The same batch of the drugs is now being used on some patients during the ongoing Nipah outbreak in the state.

Officials in the ICMR said it had approached SII asking whether it would agree to make limited doses of the MAb only for free supply in the event of Nipah outbreaks. Suresh Jadhav, business head and technical director at SII, said the company has agreed to start making the antidote following technology transfer under CSR but expects to make small amounts — less than 1,000 doses per year — as Nipah outbreaks are rare.

R R Gangakhedkar, country head of epidemic and communicable diseases, ICMR said the agency was trying to get the drug made in India as the disease, so far, has been specific to Indian subcontinent. “This is a problem of our region and that’s why we have to try and find solutions,” he said. “However, as the efficacy of the drug has been tested only in US and Australia so far we will offer the drug to a patient only if they want it and it won’t be treated as clinical trial.”

Now we are on Telegram too. Follow us for updates
TAGS
Nipah virus Nipah Outbreak ICMR