The government is mulling to make it mandatory that Anganwadi workers help victims file such cases, should the victim feel uncomfortable doing it on her own.

JAIPUR: Stunned by the nationwide uproar over the Thanagazi gang rape case, where an 18-year-old Dalit woman was allegedly gang-raped by five men on April 26 in Alwar district, the Ashok Gehlot government will revamp the procedure for registering of complaints.

After issuing orders that in such cases a complaint could be booked in the SP’s office, the government is mulling to make it mandatory that Anganwadi workers help victims file such cases, should the victim feel uncomfortable doing it on her own.

The new order said, once the complaint is received, the police will start the process of lodging the FIR themselves. 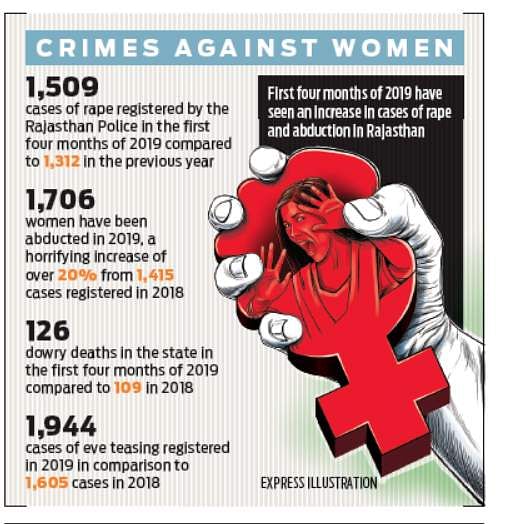 The state government has a larger worry on its hands — in just four months of 2019, crimes against women have galloped by 40.56% to

The government has moved to co-opt Anganwadi workers to coordinate with the police and also propagate the provisions under law to ensure punishment and instil fear among potential criminals.

In the Thanagazi case, the inaction and delay in registering FIR led to severe criticism.

The FIR was filed only after a video of the incident, made by the accused, went viral. The police tried to justify this delay by claiming that they were overloaded with work due to the Lok Sabha elections.

Following it, the home department was instructed to make alternate arrangements in such cases and it was directed on June 1 that if the FIR is not lodged in the respective police stations, then the victim can file a report directly in the SP’s office.

Women activist welcomed the move allowing for the filing of FIR in the SP’s office but said that detailing Anganwadi workers to help the victim register the complaint may not be enough because such workers have no clout in villages.

Meanwhile, following an inquiry into the Thanagazi case, the government has decided to transfer the entire police station personnel, including DSP Jagmohan Sharma and has ordered a case against SHO Sardar Singh under the SC-ST Act.

Gorakhpur/Aligarh(UP): Hindutva leader Sadhvi Prachi was Sunday denied permission to visit Tappal township which was rocked by the murder of a toddler, a police official said. Four persons have so far been arrested in the case, police said.

According to the police, the incident took place in a village in the Ahirouli Bazar police station area on Friday. Of the six men, four have been arrested, while efforts are on to nab the rest two.

According to reports, the accused had a dispute with the girl’s family over the construction of the drainage channel.

Now we are on Telegram too. Follow us for updates
TAGS
Thanagazi Gang Rape Alwar Rape Case