The CBI started investigating the case on the directions of the Allahabad High Court in January this year.

NEW DELHI: The Central Bureau of Investigation (CBI) on Wednesday conducted searches at 21 locations, including the home of former UP minister Gayatri Prajapati, in connection with the illegal mining case. 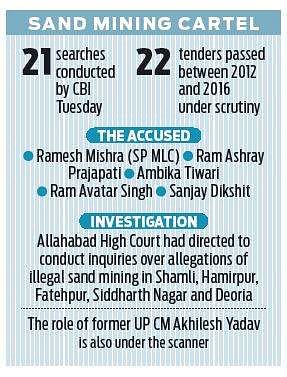 The agency conducted searches in Delhi, Ghaziabad, Lucknow, Hamirpur and three premises of Prajapati in Amethi. The role of former UP CM Akhilesh Yadav, who held the mining portfolio between 2012 and 2013, is also under scanner.

Agency sources said a total of 22 tenders, which were passed by the Akhilesh government between 2012 and 2016, are under scrutiny. The CBI alleges that both Yadav and Prajapati had given approvals for the leases when they were ministers. The agency had earlier conducted searches at several locations in January. The homes of senior officers, including IAS officer B Chandralekha in Hamirpur, who has served as the district magistrate of Bijnor, Bulandshahar and Meerut, were searched by the agency.

Now we are on Telegram too. Follow us for updates
TAGS
Central Bureau of Investigation Amethi CBI Gayatri Prajapati Samajwadi Party