20 per cent youth turning to terror are hardcore: Study

Just 20 per cent of youth now joining militancy are hardcore, a Army study carried out in J&K has said.

NEW DELHI: Just 20 per cent of youth now joining militancy are hardcore, a Army study carried out in J&K has said. The Army had commissioned the study to identify the factors which drove youth to militancy. It says various compulsions, coercion and lure have combined to draw youths to militancy.
The study which profiled terrorists and areas of militancy while identifying the trends of the last few years offers an insight into reasons and the type of youth joining militant ranks.

“We looked into causes and the problems which worked on youthful minds. The conclusion came as a surprise for just 20 per cent of the youth seemed to have opted for militancy with a hardcore conviction. Others joined for various reasons-not because they were convinced, but out of the little frustrations in their lives,” said a senior officer.

The study reveals that 40 per cent of the youths in militant ranks joined because they “do not have anything to do” and are compelled to remain in Kashmir. They were, in most cases, either coerced or lured to pick up the gun.  Many joined because they had, or have, members of their families in such groups, the study says.

“Many belong to certain areas which have been affected by terrorism for long. Many others have been brainwashed in particular madarsas... It was found in many cases that relatives and family members led many to the terror fold,” said an officer.

“The Army gives a fair chance to the youth to shun terrorism and also conducts programmes to the engage youth,”  the officer said. 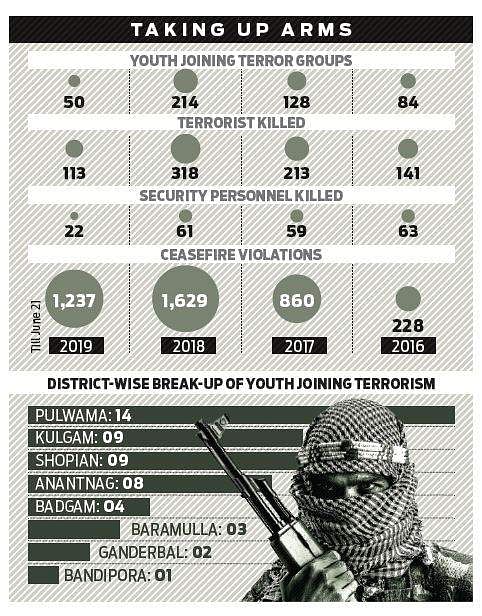