While the total funds released for bonded labour rehabilitation was Rs 664.5 lakh in 2017-18, it has been reduced drastically to Rs 253.3 lakh the following year.

NEW DELHI: Even as the labour ministry has not been successful in rehabilitating all the rescued bonded labour from across the country, the funds released for their rehabilitation has been reduced by 61 per cent, as per the latest data from the ministry.

While the total funds released for bonded labour rehabilitation was Rs 664.5 lakh in 2017-18, it has been reduced drastically to Rs 253.3 lakh the following year.

Only 2.93 lakh of the total 3.13 lakh labourers rescued have been rehabilitated.

However, ministry officials said that around 19,000 bonded labourers could not be identified and hence were not rehabilitated.

“Around 19,500 labourers were not available for rehabilitation as they had died or left the centre without any address for communication,” a ministry official said.

States like Assam, Gujarat, Pudducherry, Jharkhand, Punjab, Uttarakhand and West Bengal have a cent per cent record in terms of rehabilitating the bonded labour.

While Assam has rehabilitated all 12 of the rescued labour, Pudducherry, Uttarakhand, Gujarat, Jharkhand, Punjab and West Bengal have successfully rehabilitated nine, five, 64, 314, 252 and 344 bonded labourers respectively.

The worst performing state was Haryana which has managed to rehabilitate only 92 of the 594 bonded labourers rescued.

Experts, however, are sceptical about the numbers. They feel that the numbers could be far higher both for a number of rescued labour and number of rehabilitated labour.

“It is very possible that the numbers are far higher. Firstly, there is no correct definition of rehabilitation. Merely by keeping someone in rehabilitation centres does not constitute rehabilitation. The labour needs to improve skills in order to lead better lives,” an official of the Bandhua Mukti Morcha said. 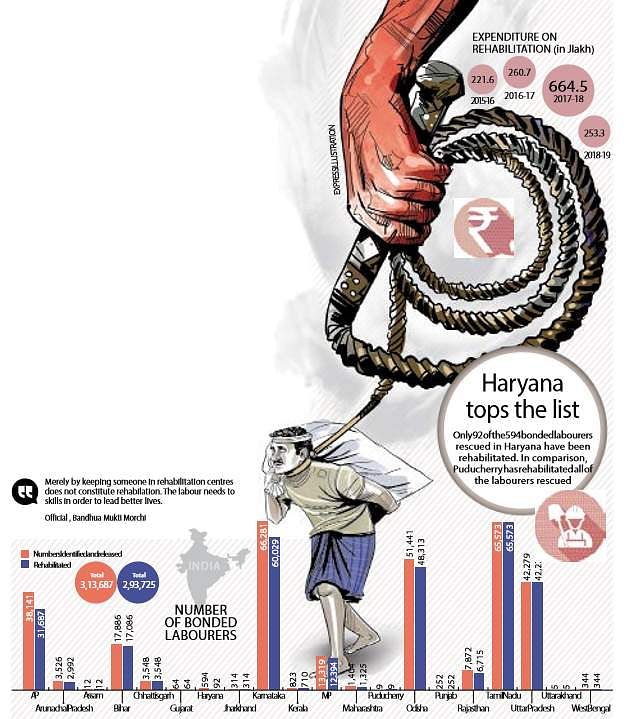