Under the Awas Yojana, 26 lakh houses have been completed while the government has set the target of completing one crore houses by 2022.

NEW DELHI: Some of the government’s flagship schemes for infrastructure development in urban areas have picked up pace as they completed four years, with the Ministry of Urban Affairs on Tuesday claiming that the schemes would be completed as per the targets.

PM Narendra Modi took to Twitter to express his thought on the urban transformation schemes saying, “Four years ago, today we started important initiatives PM Awas Yojana (U), AMRUT, Smart Cities with the aim of #TransformingUrbanLandscape in India. 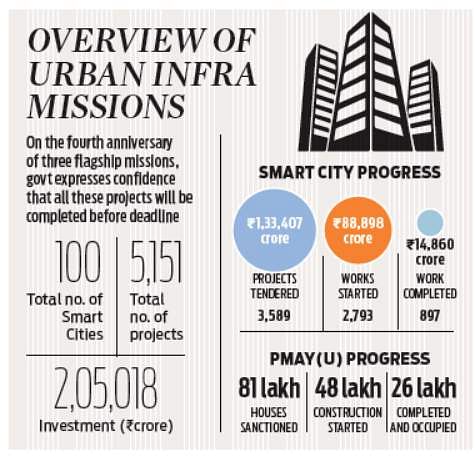 These initiatives have not only helped usher in a new paradigm of urban development but have also transformed crores of lives.”

Speaking on the fourth anniversary of the three flagship urban missions, urban affairs minister Hardeep Puri expressed confidence that all these projects will be completed before the scheduled time. The PM Awas Yojana (Urban), he hoped, would achieve its target by the end of 2020.

Comparing the works done under the NDA government with those under the UPA government, he said, “As compared to overall investment of Rs 1.57 lakh crore during 2004-14, the investment in urban rejuvenation during 2014-19 is Rs 10.31 lakh crore which translates into 554% increase.”

Under the Awas Yojana, 26 lakh houses have been completed while the government has set the target of completing one crore houses by 2022. Under the Atal Mission for Rejuvenation and Urban Transformation (AMRUT), plans worth Rs 77,640 crore have been approved.

Though less than 10 per cent of the work under the Smart City Mission has been completed so far, officials claimed the mission had seen a turnaround and the number of projects completed had seen a quantum jump of 182% over one year.

Now we are on Telegram too. Follow us for updates
TAGS
Hardeep Puri PM Awas Yojana AMRUT Smart City Project