It’s the first incident in Chhattisgarh state where a sarpanch has drafted a letter in English to draw the attention of a bureaucrat on the issues of his village.

RAIPUR: A chief executive officer (CEO) of the Kawardha district in Chhattisgarh perhaps never expected an application written in English will be addressed to him by a gram panchayat sarpanch seeking completion of development works of his area, about 130 km north of Raipur.

It’s the first incident in Chhattisgarh state where a sarpanch has drafted a letter in English to draw the attention of a bureaucrat on the issues of his village.

“Our Gram Panchayat is connected under the Paliguda Rurban Mission scheme. There is a great need of concrete cement (CC) road and concrete drainage”, the Paliguda sarpanch Bhisham Pandey wrote in his application and further justified the demands citing that the streets (pathways) get filled with water owing to lack of drainage system and there remains a risk of an outbreak of infection.

The district panchayat CEO Kundan Kumar, a 2014-batch IAS officer, was quick to respond, “I am very impressed with your letter (in English). Your village will soon have development works”. 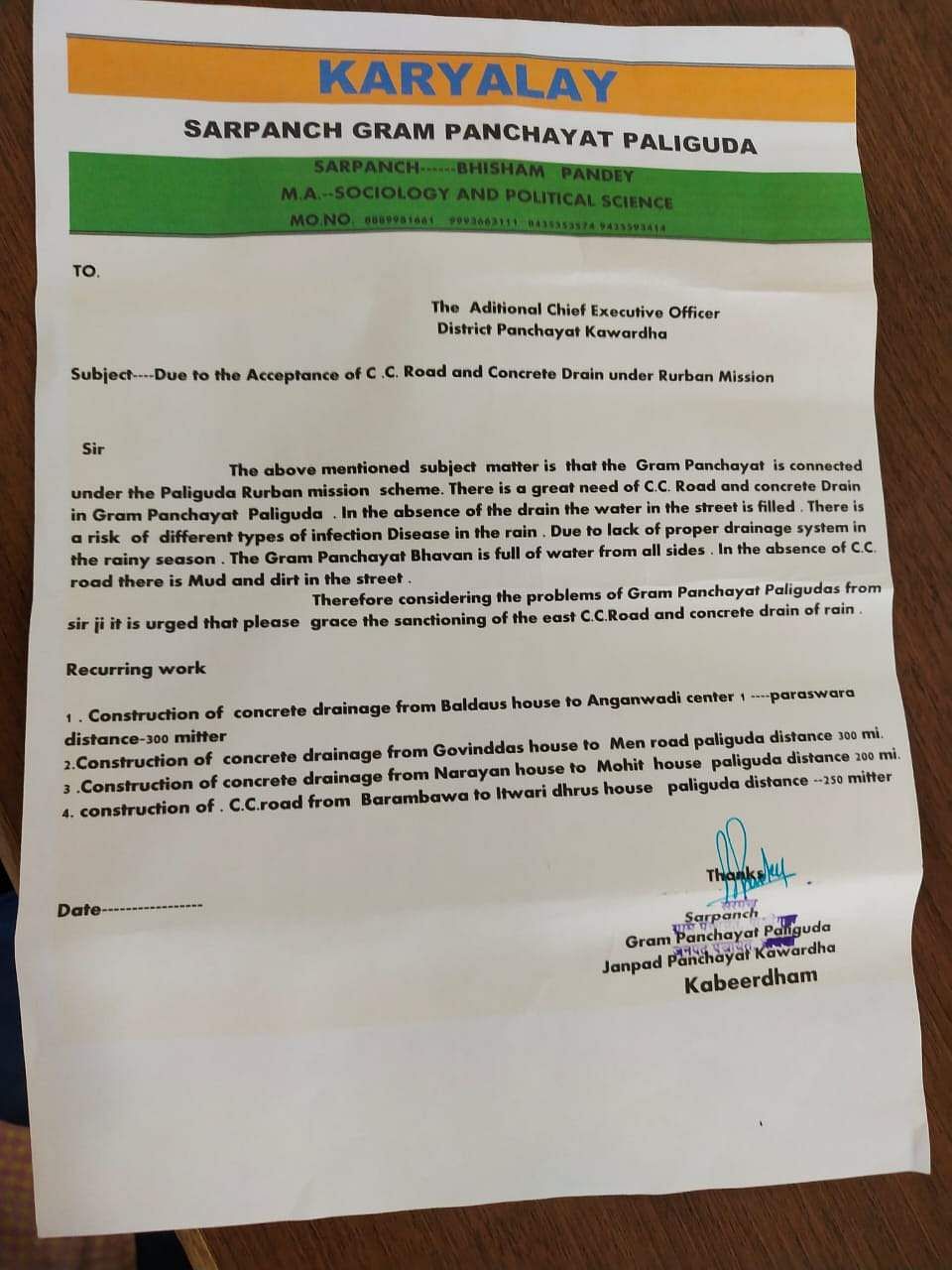 Sarpanch Pandey interestingly has done his Master of Arts (MA) in two subjects — sociology and political science and was topper in the subjects of English and Maths in his higher secondary school. He told that he contested the panchayat election in 2014 at the behest of local people and got elected.

“Never in my five years of service so far, I came across an application or a letter written in English by any sarpanch in Chhattisgarh. I always impressed upon to consistently make the school education system better. And English is largely weak among the students in Chhattisgarh and there is a need to improve their levels. Sarpanch apparently understands the importance of English language and knowing my academic background (engineer) might have thought to influence me writing in English”, said Kumar.

Paliguda gram panchayat about 15 km away from the Kawardha district headquarter, has a population of 2030 with 14 wards. The panchayat is covered under the National Rurban Mission scheme, that aims at the development of a cluster of villages with nurturing the essence of rural community life and stimulate local economic development along with basic services.

After getting elected as sarpanch, Pandey stated that his mission remained to ensurethat everyone has access to the basic minimum amenities besides the other development works in the village.  The sarpanch didn’t hesitate to admit that he chose to write to the CEO in English to create an impression upon him though he has never met Kumar.

Now we are on Telegram too. Follow us for updates
TAGS
Sarpanch English letter village Sarpanch Chhattisgarh Chhattisgarh Sarpanch