22 states to wrap up polls in one phase, three to go at it in seven

CEC Sunil Arora said that the decision on polls in states and phases has been taken keeping in mind issues like security, exam dates and festivals.

NEW DELHI: Lok Sabha polls in 22 States will be completed in a single phase, while states like Bihar, Uttar Pradesh and West Bengal will be held in seven phases. Even states like J&K and Odisha will witness the polls in multiple phases.

CEC Sunil Arora said that the decision on polls in states and phases has been taken keeping in mind issues like security, exam dates and festivals. “Security is the main issue. Availability of security forces and their transportation are things to be kept in mind while deciding on dates and phases,” he said. LS Polls will be held in five phases in J&K and four phases in Odisha. EC asserted that this is mainly because of the security concern in the states.

Arora also said that the Assembly polls were not held in J&K along with the general elections because of forces and recent developments. “Political parties were in favour of simultaneous polls but they also asked about security of candidates. Each candidate would require security which is an issue,” he added.
The elections will start on April 11 and continue till May 19 in seven phases. The counting will be held on May 23. Nearly 90 crore voters will be eligible to vote for 543 Lok Sabha constituencies across the country. Assembly polls for four States including Arunachal Pradesh, Andhra Pradesh, Sikkim and Orissa will also be held along with the General elections. The current Lok Sabha term will end on June 3.

With the announcement of the election dates, the model code of conduct (MCC), too, has come into force. The MCC bars the government from announcing major policy decisions. “Any violation will be dealt with in the strictest manner,” Arora said. Karnataka, Manipur, Rajasthan, Tripura will have polls in two phases. Bihar, UP, West Bengal will see elections in maximum seven phases as these are big States and transportation and availability of security forces is also major issues. 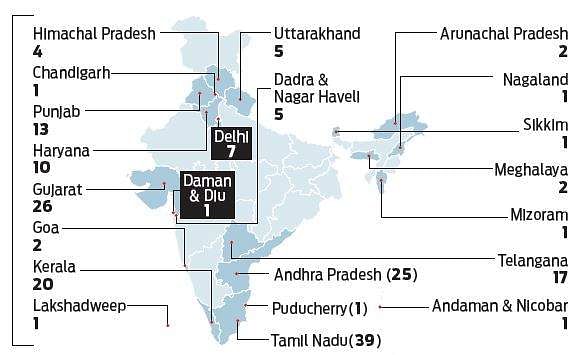