Sukma happens to be the home district of Lakhma, a five-time Congress MLA and a minister for commercial tax (excise) and industry portfolio.

RAIPUR: Can a refusal by IPS officer to comply with the directive of the Chhattisgarh minister (who is not home minister) to shift a police station in-charge to another thana vindicate the government's action to transfer him out from the position of a district superintendent of police (SP)?

Jitendra Shukla, a 2013-batch IPS officer and district police chief of Sukma, one of the worst Maoist-affected districts in south Chhattisgarh, was asked by the minister Kawasi Lakhma to transfer a Phoolbagdi police station incharge Surendra Pambhoi to another thana of either Tongpal or Chindgarh in the district.

Sukma happens to be the home district of Lakhma, a five-time Congress MLA and a minister for commercial tax (excise) and industry portfolio.

Shukla in response to the minister’s letter clarified that it’s the prerogative of the SP to ensure law and order, to ensure security in the district.

“And this is being done through the subordinates police station in-charge (under his jurisdiction). And to achieve this it’s the right of the SP to appoint or remove any officer”. 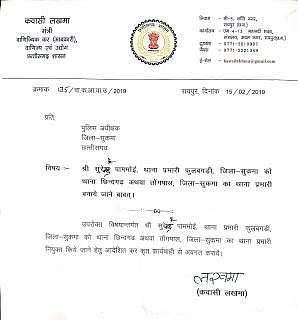 He then cited that its not appropriate for any outside interference or putting pressure on the designated functioning of the SP as he ruled out the possibility of giving Pambhoi the new responsibility in either Chindhgarh or Tongpal police station.

The state government, however, found the move of the young IPS officer as “unacceptable and on the disciplinary ground he was shunted out of Sukma to the state police headquarters”.

The chief minister Bhupesh Baghel stated that the SP has no right to write a letter to the minister.

However, the opposition BJP criticised the government’s decision asserting that such transfer on the evident ground of the district SP posted in the hypersensitive district “doesn’t augur well for the police force”.

“It seems the Congress government wants to make the IAS and IPS officers to work as their puppets. The decision will have a detrimental impact on the morale of the officer”, the leader of opposition Dharamlal Kaushik said.

The Sukma SP wrote on his Facebook wall: ‘unwanted and unexpected…..But time has come to say ….Bye Bye Bastar and gud bye to Sukma’.

The national organisation ‘Forum for Fast Justice’ didn’t find anything wrong on what the SP told the minister regarding his responsibilities.

“The SP being the district police chief is responsible for maintaining law and order besides preserving peace and security. Political interference in many states has virtually turned the police as sycophants and puppets in the hands of ruling politicians. But here the SP has guts to say no. We are approaching the Supreme Court for drastic police reform where the officers should work independently but stand liable for their actions and responsibilities”, said Pravin Patel, national convenor of the Forum, which has the presence in 22 states.