Chhattisgarh IAS officer reveals his academic percent on FB, to convince students with poor results that ‘percentage in exams is just a number game’.

RAIPUR: Shocked by the news of a suicide committed by a student in Chhattisgarh for scoring poor percentage in the recently declared state board exams, an IAS officer of 2009-batch and Kawardha district
collector took to Facebook post to appeal the students “not to get disheartened or lose hope” on getting the unexpected results.

“The percentages are just a number game. You will be getting many more chances to prove your calibre. Keep moving”, the collector Avneesh Kumar Sharan wrote on his FB page on Sunday. To bolster up his empathic response for students battling the post-results depressions, Sharan didn’t hesitate to share the percentage he obtained in class 10th, 12th and later in graduation and uploaded his educational qualifications in an attempt to add impetus to his appeal. 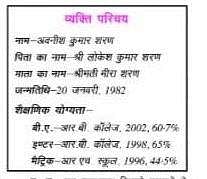 He secured 44.5 and 65 percent marks in Class 10th and 12th respectively. And scored 60.7 % in his graduation, hinting that he didn’t lose heart and moved ahead with determined will, analysing the situation and persisted with mission to qualify a tough UPSC civil services examination. His plea to keep the ambition intact was equally aimed for the parents as well.

Sharan's message was intended to help students counter the stress and depression owing to the low scores results achieved in Chhattisgarh Board of Secondary Exam declared on Saturday beside those of CBSE and ICSE announced previous week.

A native of Bihar, Sharan told the Express that he was much disturbed reading in newspaper about the student who killed himself for a thing not really so much significant that provoked the act of committing suicide.

“Today choices are not limited and the opportunities will keep coming as long as the students endeavour to persist with their mission. Why to let the school percentage decide the future. They should soon get over it as exam results are not the end of the world”, said the collector.

Now we are on Telegram too. Follow us for updates
TAGS
Chhattisgarh student suicide IAS officer Avneesh Kumar Sharan