Lok Sabha results: Ten candidates who won by the slimmest of margins

There were at least eight constituencies where the ruling party's candidates won by relatively thin margins.

The BJP might have won a bigger mandate than in 2014.

The stunner of a verdict was built on a mighty showing in Uttar Pradesh too, where it won 62 seats, just nine fewer than in 2014. This despite an SP-BSP alliance that had seemed formidable on paper.

But there were at least eight constituencies where the ruling party's candidates won by relatively thin margins.

The closest of this was Machhlishahr in Uttar Pradesh, where BJP candidate Bholanath scraped through by a mere 181 votes. In 2014 the saffron party's Ram Charitra Nishad had clinched the seat with a margin of more than 1.72 lakh votes. 2019 though was nowhere near as emphatic.

Bholanath polled 488397 votes, while his nearest rival Tribhuvan Ram of the Bahujan Samaj Party ended up with 488216 votes.

There were nine other seats where the victory margin was under 10000 votes and one where the margin was a little over 10000 seats.

The BJP won eight of these close-run affairs.

Interestingly, it could well have been nine for them if the result in the Arambagh constituency in West Bengal could have gone their way. Here, the Trinamool Congress' 33-year-old sitting MP Aparupa Poddar managed to scrape through by 1142 votes against Tapan Kumar Ray of the BJP.

The other winner in this list was Imtiyaz Jaleel of the All India Majlis-E-Ittehadul Muslimeen, who won by a margin of 1142 votes over Chandrakant Khaire from Maharashtra's Aurangabad seat. It was one of the two seats that the party won in Lok Sabha Elections 2019. 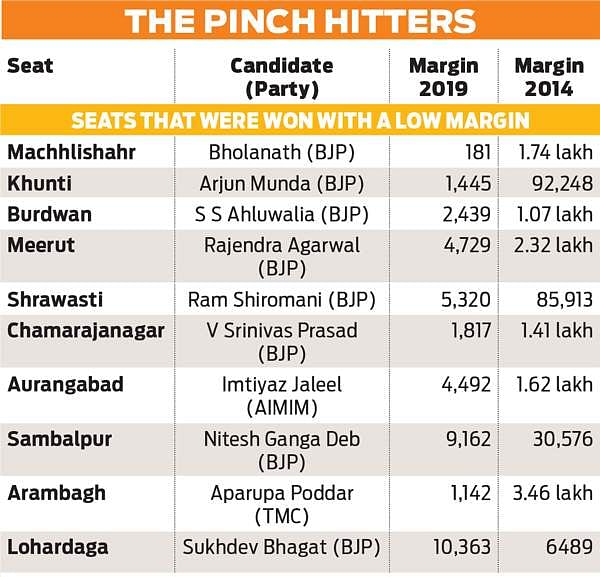 Stay up to date on all the latest Nation news with The New Indian Express App. Download now
(Get the news that matters from New Indian Express on WhatsApp. Click this link and hit 'Click to Subscribe'. Follow the instructions after that.)
TAGS
Machhlishahr Bholanath Lakshadweep PP Mohammed Faizal Andaman Kuldeep Rai Sharma Aparupa Poddar Imtiyaz Jaleel