Union Secretary of Defence R&D Department G Satheesh Reddy on Thursday said the gun has cleared all developmental tests successfully and will be inducted in the Armed Forces after a couple of more trials.

Reddy was attending the 125th anniversary of Proof and Experimental Establishment (PXE), a laboratory of Defence and Development Organisation (DRDO), at Chandipur in Balasore district. "ATAGS is the pride of the nation. The gun has now the world’s longest range in 155 mm class. PXE has the distinction of testing the gun and making it certified. The Armed Forces have already given their consent for induction of a number of such guns," he informed.

Developed by Armament Research and Development Establishment of DRDO in a consortium model, the ATAGS comes with six round automated magazine capable of firing in 30 seconds. The existing 155 mm and 52-calibre guns have standard three-round magazine. Since the magazines need to be loaded manually, it leads to casualties during the exercise.

The project was taken up in 2013 to replace older guns in service with modern 155 mm artillery gun. Configured with an all electric drive the hydro lateral gun has a maximum firing range of 48 km and can be deployed in less than three minutes. It was first showcased publicly during the Republic Day parade in 2017.

The advanced gun system that weighs around 18 tonne with an elevation up to 70 degrees has undergone developmental trials at Balasore, Pokhran and Sikkim. While the ballistic internal trial and proofing were done at PXE and strength and design were validated during summer trials at Pokhran, winter trails were conducted in Sikkim.

Reddy, who is also the Chairman of DRDO, urged the scientists working with the PXE and Integrated Test Range (ITR) to come up with modern technologies, equipment and infrastructure to ensure that the test range is one the most modern ranges in the world.

He also warned to remain alert for future warfare. It is just not land, water or sky, threats related to space and cyber world have entered into the warfare spectre in a big way, he said.

“When gadgets have become part and parcel of life, we are always vulnerable to cyber attacks. Measures need to be taken by all to ensure that cyber security is insured. Advisories have been sent to all laboratories. It can be detrimental if not adhered to properly,” he added. 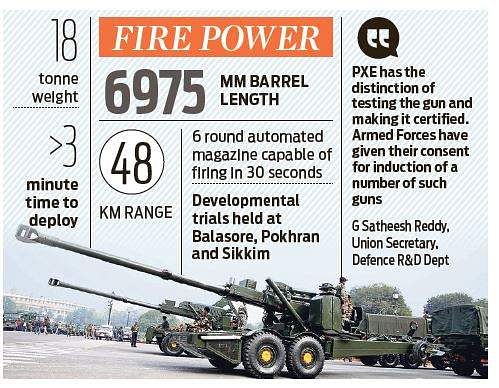