The route 'Ram Van Gaman Path' is believed to have been undertaken by Lord Ram during his exile.

RAIPUR: After the Supreme Court's verdict on Ayodhya land dispute paved way for Ram temple construction, the  Congress-ruled government in Chhattisgarh is now gearing up to identify key spots along the route cited as ‘Ram Van Gaman Path’, which is believed to have been undertaken by Lord Ram during his exile, and to develop them as the tourist destinations.

The Bhupesh Baghel cabinet decided to recognise these places as notable historical, cultural and religious tourist sites. A survey will closely examine eight major locations that "fall along the forested route taken by Lord Ram in Chhattisgarh". 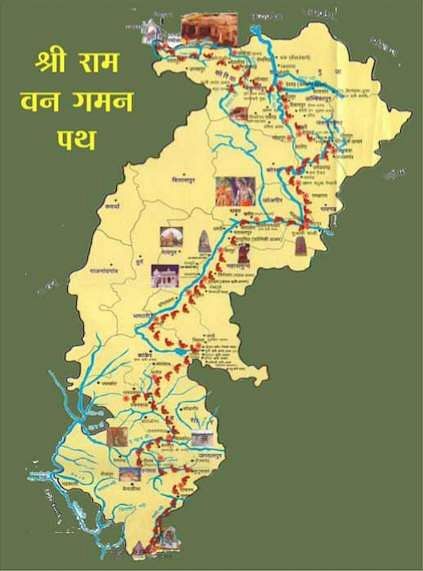 A concept plan that will incur Rs 92.32 crore to develop these areas has been prepared. A committee of the tourism department will visit to study the route and spots of the eight locations to equip working out the suitable development plans.

"Besides the basic tourist amenities there will also be interpretation centres for the visitors along the route to understand the various ancient myths associated with the epic journey by Lord Ram in Chhattisgarh. Efforts will also be directed towards promoting these major locations at national level and globally,” said Anbalagan P, special secretary, state tourism department.

The state is currenty relying on two research-based books — ‘Dandakaranya Ramayan’ and ‘Chhattisgarh Paryatan me Ram Vangaman Path’ besides other relevant texts available.
According to these researches, Lord Ram spent around 10 out of his 14 years of exile in Chhattisgarh districts of Koriya, Ambikapur, Jashpur, Janjgir-Champa, Bilaspur, Mahasamund, Raipur, Dhamtari, Kanker, Kondagaon, Narayanpur, Bastar, Dantewada and Sukma.

The research documents stated that Lord Ram had travelled through 75 notable places in Chhattisgarh during his exile from Ayodhya, and is believed to have stayed at 51 locations for some moments, the state officials stated.

"The state government is chalking out extensive plan to unfold and relate historical, cultural and religious tourism through developing Ram Van Gaman Path. The work on surveys will commence by early December," said Iffat Ara, managing director, Chhattisgarh Tourism Board.

A four-member team of the department would be constituted for the survey of the eight proposed spots— Sitamadhi-Harchaika, Ramgarh, Shivrinarayan, Turturiya, Chankhuri, Rajim, Sihawa and Jagdalpur. The team will also work on accomplishing essential facilities for tourists there.

The state government besides allocating a budget for the project might also seek financial support from the union tourism ministry.

Now we are on Telegram too. Follow us for updates
TAGS
Ayodhya verdict Ram temple Ram exile