Iltija said she has met her mother about six times since she was detained.

SRI NAGAR:  Detained PDP chief Mehbooba Mufti’s daughter, Iltija Mufti, who has become politically active after the detention of mainstream leaders following the scrapping of Article 370, said the centre has intentionally obliterated the lines between separatists and pro-India politicians and it would prove counter-productive as the anger on the ground in the Valley is directed against New Delhi and not the mainstream camp as was the case in the past.

Iltija said she has met her mother about six times since she was detained. “She is in solitary confinement and coping as best as she can do. It’s been three months since they have been in detention. I think it is collective punishment as everybody in Kashmir is suffering,” she said.

Asked why none of detained leaders challenged their detention in courts, she said, “I don’t have much hope on judiciary. What happened when Farooq Abdullah’s detention was challenged in the court by his friends? He was immediately booked under PSA.”

She added, “Obviously the reason why I have not challenged my mother’s detention in court is that I know the government would invoke PSA on her. That fear hangs like a sword over our head.” On the prevailing 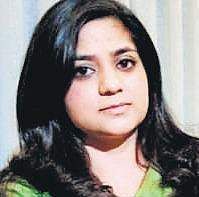 situation in Valley, Iltija said it is far from normal.“Now the anger on the ground is against New Delhi.

Earlier, mainstream would serve as a buffer and they used to face the anger for the wrongs committed by Delhi. But this time the anger is not against mainstream politicians (Omar Abdullah or Mehbooba Mufti) but it is directed against New Delhi,” she said adding, “Earlier, the politicians would be the fall guy or scapegoat.” “I did not join politics when my mother (Mehbooba) and grandfather (Mufti Sayeed) were there. Since nobody is around, I am talking but that does not mean that I am a leader and interested in joining politics,” she added.

Stay up to date on all the latest Nation news with The New Indian Express App. Download now
(Get the news that matters from New Indian Express on WhatsApp. Click this link and hit 'Click to Subscribe'. Follow the instructions after that.)
TAGS
Mehbooba Mufti Iltija Mufti Article 370 Jammu and Kashmir Kashmir crisis