Some of the bigwigs who haven’t asked a single question in Haryana Assembly during last five years include Congress leader Randeep Surjewala and BJP spokesperson Captain Abhimanyu.

NEW DELHI: Of the 174 Bills that were introduced in the outgoing Haryana Assembly, 170 were passed, a report by the Association of Democratic Reforms (ADR) has revealed.

The report was released Monday, weeks ahead of the Assembly elections in Haryana. The state goes to polls on October 21.

In terms of asking questions, Congress MLA from Tosham Kiran Chaudhary topped the list with 225 questions. She was followed by INLD’s Naina Singh Chautala with 180 and Kehar Singh of the INLD with 124. Only one legislator of the ruling BJP features in the list of the top 10 MLAs who asked the highest questions.

There were 16 legislators across party lines who did not raise a single issue in the five-year tenure. Some of the bigwigs who haven’t asked a single question in five years include Congress leader Randeep Surjewala and BJP spokesperson Captain Abhimanyu.

“I don’t know why they are not keen to ask questions... In fact, bills are passed without much discussion. It is not a happy state of affairs,” Major General (Retd) Anil Verma, director of ADR said.

Verma said that the request for the MLAs’ attendance details was refused.

“I don’t know what’s so secret about that?” he questioned. 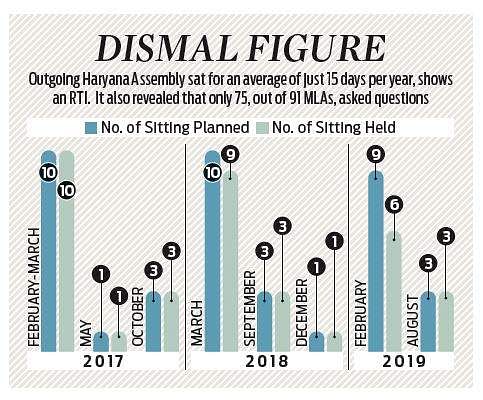 Those saying 'we won't show papers', will soon won't be able to show their faces: Dilip Ghosh