However, the Centre has made an exception for Northeastern states, Jammu and Kashmir, Himachal Pradesh, Uttarakhand and Left-Wing Extremism-hit states.

NEW DELHI: States and Union Territories will now have to shell out more for deployment of Central Armed Police Forces (CAPFs). With the Ministry of Home Affairs (MHA) revising the policy on fixation of deployment charges for various duties, the states and UTs will have to pay around 10 per cent more each year till 2024 to secure the services of CAPFs, sources said.

The MHA, however, has made an exception for Northeastern states, Jammu and Kashmir, Himachal Pradesh, Uttarakhand and Left-Wing Extremism-hit states — they will have to pay only 10 per cent of the total charges of CAPF deployments.

The MHA has urged the states and UTs to “ensure necessary heads are opened in their budget, if not existing, to facilitate regular payment of deployment charges”. 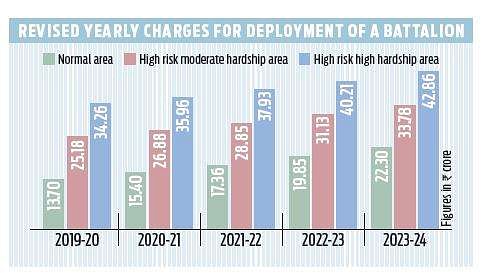 Stay up to date on all the latest Nation news with The New Indian Express App. Download now
(Get the news that matters from New Indian Express on WhatsApp. Click this link and hit 'Click to Subscribe'. Follow the instructions after that.)
TAGS
Central Armed Police Forces CAPF deployment CAPF states expenditure