NEW DELHI: Have you been wondering why the ATMs have been barely dispensing Rs 2,000 notes for last few months?

That’s because the printing of the high-value note has been stopped, the Reserve Bank of India informed this newspaper in reply to an RTI query.

The Bharatiya Reserve Bank Note Mudran Private Limited has not printed a single banknote of Rs 2,000 denomination in this financial year, the RTI reply said.

Experts said the move to taper down and finally stop the printing of the high-value notes appeared to be an attempt to prevent easy hoarding, which defied the government’s initiatives to curb black money flow.

“Possibly, removing high-value notes from circulation makes it difficult to have too many black money transactions. But, it’s a better policy than demonetisation, which was very disruptive. Here, you are not disrupting anything. You are simply withdrawing circulation,” said economist Nitin Desai.

“Many European countries have done this. But in India, we have a very large informal sector and an agricultural sector, which us cash rich,” Desai said, adding that the value of total circulation is being maintained and there would not be much problem.

Economist and author Sher Singh echoed a similar view. “Possibly, they are trying to stop people having a lot of cash or black money. Moreover, the government wants more and more digital transactions. Hoarding is also very easy with Rs 2,000 notes.” 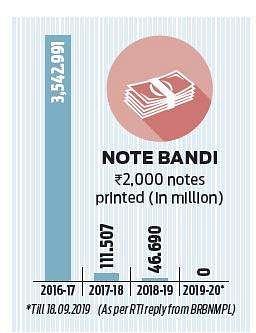 Officials said a high circulation of Rs 2,000 notes may defeat the government’s objectives as they are easier to use for illegal purposes such as smuggling. In January, unaccounted cash of Rs 6 crore in Rs 2,000 notes was seized at Andhra-Tamil Nadu border.

Earlier this year, there were reports on printing of Rs 2,000 notes being stopped, but the government had denied that.
Even the latest RBI data disclosed gradual reduction in circulation of the Rs 2,000 notes. There were 3,363

Now we are on Telegram too. Follow us for updates
TAGS
RTI Rs 2000 notes black money 2000 currency note currency printing