Abhijit Banerjee hails from Kolkata, is an alumnus of JNU; had criticised DeMon, raised his voice against data suppression on jobs; was consulted by Congress on its Nyay scheme

India-born Abhijit Banerjee along with his wife and partner in research Esther Duflo — both professors at US-based Massachusetts Institute of Technology — and their colleague from Harvard, Michael Kremer, won the Nobel Prize for Economics, on their “experimental approach to poverty alleviation”. Only five other married couples have won the Nobel together in the prize’s history.

Banerjee, an alumnus of Kolkata’s Presidency University (then a college under University of Calcutta) and Delhi’s Jawaharlal Nehru University and a doctorate from Harvard University, is the second Indian origin economist to win the Nobel for Economics. Officially known as the Bank of Sweden Prize in Economic Sciences in Memory of Alfred Nobel, the award started by Riksbanken (Swedish central bank) in 1968, wasn’t created by the prize founder but is considered to be part of the Nobel awards. 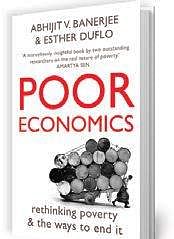 Banerjee, who with Duflo and Sendhil Mullainathan, founded the Abdul Latif Jameel Poverty Action Lab in 2003, has concentrated on researching how policy interventions like such as de-worming programmes or after-school hours tutoring for first-generation learners can help reduce poverty. He and colleagues have worked on a body of experimental economics work in developing countries in Africa, South and Southeast Asia. The economics Nobel carries a  $918,000 cash award, a gold medal and a diploma.

“This year’s laureates have introduced a new approach to obtain reliable answers about the best ways to fight global poverty,” the Nobel Committee tweeted. Banerjee is a known critic of the BJP-led government’s economic policies. On demonetisation, he had said he never understood the logic behind such a drastic step, adding it was being viewed with “bewilderment” in serious academic circles. Also, along with 107 well-known economists, he had assailed the tendency “to suppress uncomfortable data” during Modi 1.0 and sought restoration of access and integrity to public statistics. Their joint statement in March came after the government had held back publication of job data put together by the NSSO.

Soon after winning the Nobel, Banerjee told a TV channel on Monday that India’s economy is “on a shaky ground” and that the government should do pilots of policy initiatives carefully. He also suggested formulating policies that work rather than imposing those which the government imagines will work. “There is always a little bit of a willingness in India to announce policies because they sound good or have a political purpose,” he quipped.

He had advised the Congress ahead of the general elections in May about offering financial aid to the poor. However, his advice to limit the dole to Rs 2,500 a month per family was ignored and the party, then led by Rahul Gandhi, announced Rs 6,000 a month in its scheme called Nyay. Banerjee was of the opinion such an amount would be fiscally unstable.

Dulfo says her success will inspire many women

Banerjee’s wife and co-researcher, as well as former student Duflo at 47, has also become the youngest person ever and only the second woman to have received the Nobel in economics. The first was Elinor Ostrom in 2009. With Banerjee, she wrote ‘Poor Economics: A Radical Rethinking of the Way to Fight Global Poverty’, which won the Financial Times and Goldman Sachs Business Book of the Year Award in 2011. At a press conference, French-American economist said it was “incredibly humbling” to be a Nobel laureate.

She said the profession is not always a welcoming one for women. “Showing that it is possible for a woman to succeed and be recognised for success I hope is going to inspire many, many other women to continue working and many other men to give them the respect that they deserve like every single human being,” Duflo said. Kremer, their co-winner, is the Gates Professor of Developing Societies in the Department of Economics at Harvard University.

A Fellow of the American Academy of Arts and Sciences, a recipient of a MacArthur Fellowship, the economist has similarly worked on health and agricultural interventions to fight poverty. Prized moment walking into the press conference to a round of applause and a standing ovation, Banerjee in his opening remarks said that it is “wonderful” to get the Nobel Prize ‘because it’s a prize not, I think, for us, but also for the entire movement.'

He said about 400 professors are associated in some way with Abdul Latif Jameel Poverty Action Lab’s work and are doing randomised control trials on issues as diverse as governance problems in Indonesia, getting children immunised in India and getting children under bed nets in Sub-Saharan Africa. “I think it’s still going to be wonderful for the movement that this prize was given because I think it’s going to make it a little easier to penetrate the many doors that you know are half-open to us or not quite open to us and hopefully bring the message of policy-based on evidence and hard thinking to many other places as well,” he said.

Change the way we think

Banerjee and Duflo wrote Poor Economics: A Radical Rethinking of the Way to Fight Global Poverty. The book, which won the Financial Times and Goldman Sachs Business Book of the Year Award in 2011, has been translated into over 17 languages. The book rejects broad generalisations and formulaic thinking.