The Indian Railways has chalked out a slew of measures through an Environment Sustainability Plan for the next 10 years.

NEW DELHI : The Indian Railways has chalked out a slew of measures through an Environment Sustainability Plan for the next 10 years. According to the plan, the national transporter will promote the use of energy conservation methods and maximise the use of alternative forms of clean energy to reduce its carbon footprint.

“The railways is a large network and to keep it operational requires a lot of fuel which in turn leads to a lot of emissions. The first step is to blend diesel with biodiesel. This significantly reduces our carbon
footprint,” a railway ministry official said. 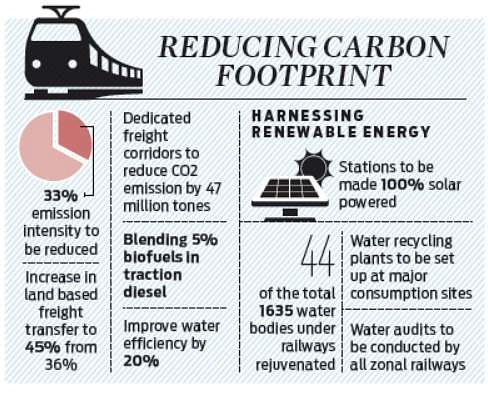 The Environment Sustainability Plan will also aim at reducing the intensity of emissions by 33 per cent by 2030. Though freight movement is the largest source of income for the national transporter, the plan aims to increase land-based freight traffic to 45 per cent from the existing 36 per cent. A measure to improve the efficiency of water used in stations and trains will also be undertaken. The programme, called water audit, will be conducted by all zonal railways at major consumption points.

“Apart from the railways, the audits will be conducted by the third party as well to keep discrepancies in check,” the official said and added that 319 such audits have been conducted so far while 62 were conducted in 2018-19 alone. A total of 56 points where the audits will take place are at a planning stage currently.
The industrial units of the railways will also contribute to the plan by going green.

Now we are on Telegram too. Follow us for updates
TAGS
Railways Environment Sustainability Plan