Eight helicopters have been inducted into the air force in the first batch out of the 22 procured from the US.

NEW DELHI/CHANDIGARH : Eight US-made Apache AH-64E attack helicopters, one of the world’s most advanced multi-role combat flying machines in the world, were inducted into the Indian Air Force at Pathankot Air Base, Tuesday.Air Chief Marshal B S Dhanoa and Western Air Commander Air Marshal R Nambiar performed a pooja at the base before the induction ceremony. The newly inducted Apaches are part of the Helicopter Unit (HU) 125 Squadron (Gladiators). 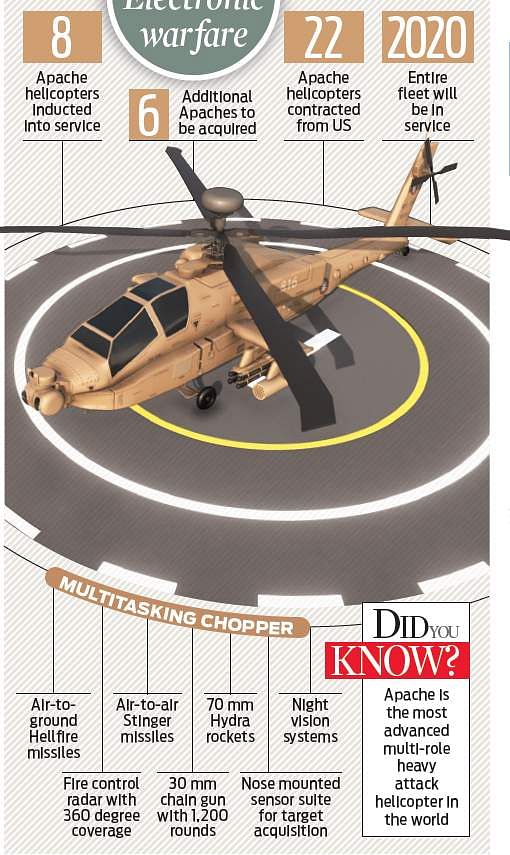 “These helicopters are advanced multi-mission and fiercest attack choppers in the world being operated worldwide by the US, the UK, Israel and many other countries and have proved themselves an operational success across the world. Modified for IAF needs, it would eventually replace the existing fleet of Mi-35 choppers,” said Dhanoa.

Dhanoa handed over the symbolic keys to the Pathankot base commander, where the first squadron of the Apache’s is being raised. He said the Apaches have a greater thrust and lift, joint digital operability, improved survivability and cognitive decision aiding and can be used for reconnaissance, security, peacekeeping operations and lethal attack — both in land and littoral environments — all without reconfiguration.

The order for production, training and support of 22 AH-64 Apache helicopters was finalised by the defence ministry in 2015. The government also cleared the acquisition of six Apaches for the Army in 2017. By 2020, the IAF will operate a fleet of 22 Apaches.The second HU will be 137 Squadron based out of Jorhat, Assam. India is the 14th nation to operate the Apache.

Now we are on Telegram too. Follow us for updates
TAGS
Apache attack helicopters Indian Air Force