Environmentalists and wildlife experts are worried about the rising number of tigers at the Corbett Tiger Reserve.

DEHRADUN: Environmentalists and wildlife experts are worried about the rising number of tigers at the Corbett Tiger Reserve. They fear that it may increase territorial fights, inter and intra species infighting and diversion of tigers to human establishments leading to man-animal conflict.The tiger census released in July 2019 shows that there are 250 tigers at the reserve.

“With over 250 tigers at the reserve, it means roughly 5 square kilometres for one tiger. Infighting will increase when tigers move from one area to another,” said AG Ansari, Ramnagar-based conservationist.
A study concluded in June revealed that nine tigers died due to infighting in the last five years. The Union ministry of environment, forest and climate change has commissioned a study to identify corridors through which tigers used to move from one area to another.

Parag Madhukar Dhakate, conservator of forests, Western Circle, Kumaon division said, “The study is being conducted on the condition of corridors across Kumaon division of Uttarakhand. We are looking at the aspects adversely affecting these corridors and what can be done to maintain it so that humans and wild animals can coexist. The study will identify these corridors and find the possibility of creating new ones.”
Experts also pointed out that around a century ago, tigers used to move from Shuklaphanta in Nepal to Corbett and Pilibhit and Lakhimpur area of Uttar Pradesh.

A forest department study stated that between 1990 and 2015, human settlements in the reserve’s buffer area increased from 4% to 9% while forest cover in buffer area has gone down from 55% to 43%. “The number of tigers has increased due to conservation efforts. We need to make efforts to prevent infighting,” said Rahul (who goes by his first name), the director of the reserve, said. 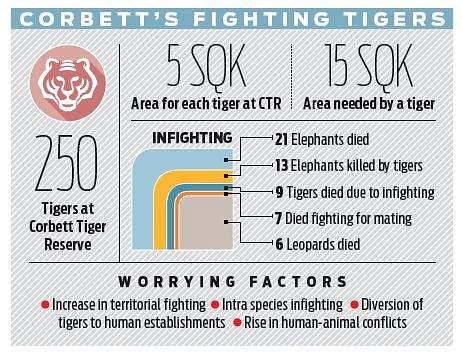 Now we are on Telegram too. Follow us for updates
TAGS
Jim Corbett Tiger reserve