JAIPUR: In an incident straight out of a Bollywood action-thriller, armed goons attacked a police station in Rajasthan’s Alwar on Friday morning to free a notorious criminal from police lock-up. Raining bullets from their AK-47 rifles, over two dozen men laid siege to the Bahrod police station where wanted Haryana crime lord Vikram, alias Papala Gujjar, was lodged.

Eyewitnesses said it was around 9 am when the armed goons arrived at the spot in three cars and stormed the police station firing indiscriminately from their AK-47s. They broke the lock-up and took away Vikram, who has a reward of Rs 5 lakh on his head, leaving the personnel on duty stupefied and motionless in their wake.

The policemen couldn’t fire a single bullet as the goons went on the rampage, eyewitnesses said.
As word of the daring escape got out, a phalanx of senior officers, including Bhiwadi SP Amandeep Kapoor and Neemrana ASP Tejpal Singh, rushed to the spot. Kapoor said the wanted Haryana crime lord was nabbed recently by the Bahrod police. He said the sudden attack caught the personnel unawares, as the goons did not give them any chance to retaliate.

He said the goons held the personnel at gunpoint and made them act according to their wishes. They then busted the lock-up and took Vikram away. The gangster had unleashed a reign of terror across several districts of Rewari in Haryana over the last few years. It is said that he ventured into the world of crime to avenge the murder of his ‘guru’ Shakti Gujjar. Along with his associate Viren, Vikram is alleged to have carried out four murders. He is wanted in multiple cases of murder and robbery. 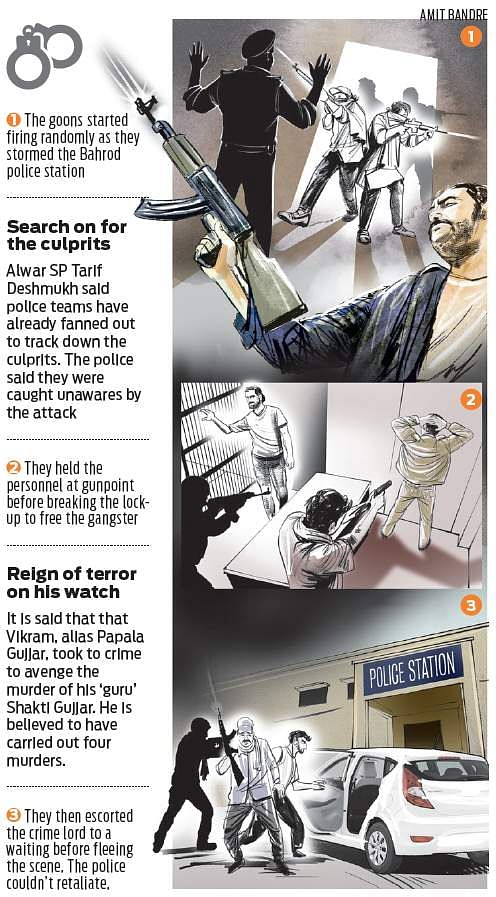 Now we are on Telegram too. Follow us for updates
TAGS
Rajasthan Police Rajasthan police station