Apache scores over the Russian Mi-35 chopper, which it is set to replace, in its night vision capability and missile power.

NEW DELHI: The Apache combat helicopter's capability at electronic warfare, along with its modern firepower, is what is expected to provide an edge to Indian armed forces in a battlefield. As per defence experts, the Apache also scores over the Russian Mi-35 chopper, which it is set to replace, in its night vision capability and missile power.

Eight units of the multi-role Apache AH64E (I) choppers - where the 'I' stands for India-specific enhancements - were inducted to the Indian Air Force (IAF) at the Pathankot Air Base in Punjab earlier this week.

India had entered a purchase agreement with US-based defence manufacturer Boeing in September 2015 whereby 22 units of the AH64E variant, which is the most modern version of the Apache, will be handed over to IAF in a phased manner by March 2020.

As per IAF sources, another four choppers are set to arrive in India in September.

The AH64E variant comes equipped with a payload of four air-to-air Stinger missiles, 16 air-to-ground Hellfire missiles, 76 Hydra rockets of 70 mm and a 30-mm chain gun with 1,200 rounds that can fire at the rate of 625 rounds per minute. The missiles can be fired in 'fire-and-forget' mode.

According to retired Air Marshal Manmohan Bahadur, a helicopter pilot himself, the Longbow radar of the Apache, which has a 360-degree coverage, helps it score over the Mi-35 in electronic warfare.

"As compared to the Mi-35, the Apache has better night vision capability and is equipped with better missiles. It can carry air-to-air missiles too apart from air-to-ground missiles. The mast-mounted sight which has the Longbow radar is a millimetric wave radar. The radar scans the battlefield electronically and can transfer pictures to other air-borne assets through network centricity," Bahadur told IANS.

Primarily, the role of the Apache in the armed forces in India will be to provide support to mechanised armoured formations in a battlefield by flying at treetop heights. The three-decades-old ageing Russian Mi-35 choppers are ageing.

Besides, the Mi-35 was not able to achieve the heights necessary for combat during the Kargil War. The choppers can vertically ascend at a maximum speed of 2,800 feet per minute. It can achieve a maximum cruise speed of 279 kmph.

"The Apache will also not be able to achieve the heights that were required of the Mi-35 during the Kargil War. For battles fought on such heights, we have the Light Combat Helicopter of Hindustan Aeronautics Limited," added Bahadur.

India is only the 16th nation in the world to acquire the Apache stealth helicopter as per the Boeing. The AH64E choppers will be part of the No. 25 helicopter squadron of IAF, which is popularly known as the 'Gladiators', at the Pathankot Air Base. 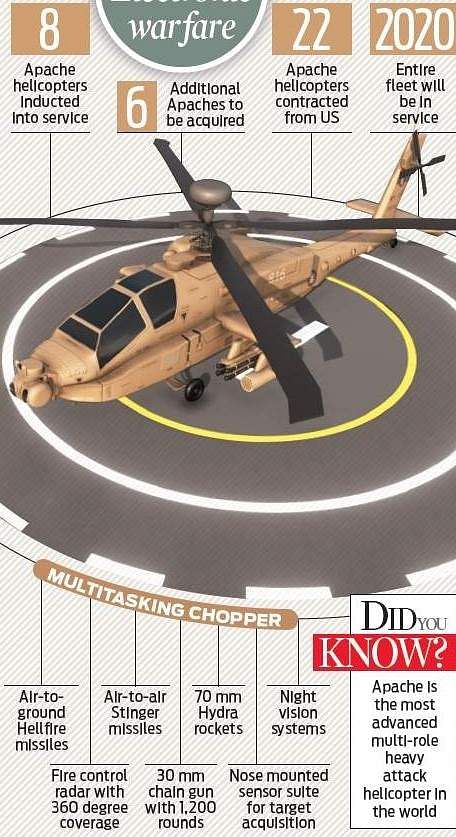 Since combat helicopters generally provide support to armoured formations and anti-tank operations, there had been been a raging debate in the country in the recent past as to whether the Apache should be inducted into the Army.

"Most armies worldwide are using the Apache choppers for anti-tank operations. These choppers are highly manoeuvrable and fly at treetop heights. If trained with the Army, understanding of land battle becomes much easier for the pilots," former GoC-in-C of Northern Command Lt. Gen. (Retired) Deependra Singh Hooda told IANS.

The Indian government signed another agreement with the Boeing in July 2018 for buying six Apache choppers for the Army at a cost of Rs 4,168 crore.

According to defence sources, one batch of the AH64E chopper might also be based at the IAF's Suratgarh Air Force Station in Rajasthan since the helicopter gunship is well-equipped for combat in desert conditions.

Now we are on Telegram too. Follow us for updates
TAGS
Mi 35 chopper Apache combat helicopter