Move came following SC direction to constitute a temporary court to record the statement of rape survivor who is admitted to AIIMS.

NEW DELHI:  The Supreme Court on Friday asked the Delhi High Court to constitute a temporary court in the premises of the All India Institute of Medical Sciences (AIIMS) to record the statement of the Unnao rape survivor, who has been lodged there following an accident in which two of her aunts were killed. The Supreme Court directions came after the probe agency requested a temporary court at the hospital, due to her medical condition, to record her statement.

Hours after the SC direction, a notification from the court stated that the temporary court has been set up at the trauma centre of the hospital. District and sessions judge Tis Hazari Dharmesh Sharma can start recording the statement of the victim from AIIMS. In August, the apex court had ordered the shifting of five cases related to the Unnao rape victim to Delhi and had also assigned a special judge for conduction of a day-to-day trial in the cases. 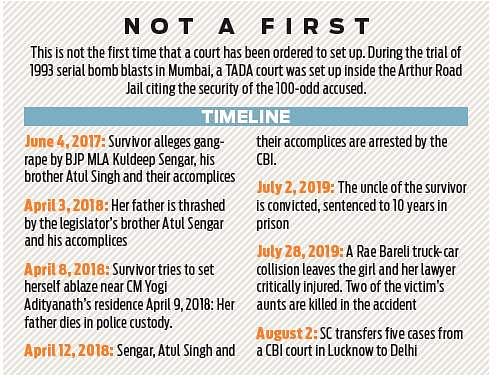 While shifting the cases, the top court had also taken suo moto cognizance of a letter written to the Chief Justice of India Ranjan Gogoi by the survivor’s family alleging threat and harassment from expelled BJP MLA Kuldeep Senger, who is the main accused in the case.

In July, the Unnao rape survivor’s car was hit by a speeding truck in Rae Bareli district while she was on her way to Rae Bareli jail to meet a relative. The survivor’s two aunts were killed in the mishap while she and her lawyer were critically injured.

The duo was admitted to a Lucknow hospital soon after. In August, the apex court had ordered the airlifting of the lawyer and the survivor to AIIMS. They are currently on advanced life support systems and are being treated by a team of doctors from the critical care, orthopaedics, trauma surgery and pulmonary medicine departments.