Head constable, Jaginder Singh and constable Sachin Kumar, both posted with the traffic wing, were dismissed for taking bribe from a commuter.

CHANDIGARH:  Police are supposed to be the enforcers of law, but in Chandigarh, the scenario is rather different, with civilians churning out evidence against police personnel violating traffic rules. Two police personnel were dismissed from service for taking a bribe of Rs 1,000, while another was fined Rs 10,000 for talking on the phone while riding a scooter by Chandigarh police after evidence provided by bystanders.

Head constable, Jaginder Singh and constable Sachin Kumar, both posted with the traffic wing, were dismissed for taking bribe from a commuter, Gurmeet Singh of Rohtak, to let him go without paying fine. Singh had jumped a red light at Piccadilly light point in Sector 35 in Chandigarh. In another incident, an Assistant Sub Inspector of Punjab Police was fined Rs 10,000 for talking on the phone while driving. 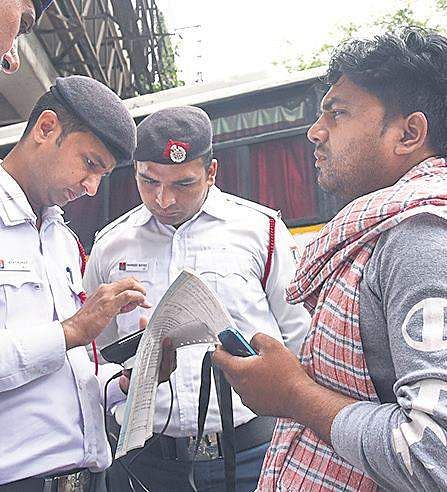 As per the advisory, if a police personnel is caught violating the traffic rules the fine will be double. Thus under the amended Motor Vehicle Act, the fine of Rs 5,000 for talking on the phone was doubled in the case of the policeman and his licence was also suspended for three months.

Road accidents claim innocents lives and commuters must be hammered down to comply with traffic rules, but at the same time citizens must not reel under the burden of huge penalties.

Razia Sultana, Punjab Transport MinisterNo exemption from fines even though the new traffic act is not applicable in Rajasthan, state cabinet minister, Pramod Jain Bhaya was issued a challan for riding a bike with his wife without a helmet on Tuesday, on the streets of Baran. The traffic police spotted him and issued him a challan of Rs 200.

Now we are on Telegram too. Follow us for updates
TAGS
Chandigarh police Traffice violations Motor Vehicles act