Tunneling damages homes, 500 shifted due to metro work in Kolkata

KOLKATA: More than 52 buildings have been damaged and around 495 residents evacuated in past four days after the tunnel boring machine of the on-going East-West Metro project hit an aquifer at colonial Bowbazar region in central Kolkata resulting in flooding and cave-ins.

In the first phase, 18 families were evacuated on Sunday and lodged in local hotels. More families were evacuated in the past three days after their houses and apartments were declared unsafe on Wednesday.
The Kolkata Metro Rail Corporation (KMRC), the implementing agency, accepted the chief minister Mamata Banerjee’s proposal to give one-time compensation of Rs 5 lakh each to the families who have been evacuated. So far, 70-odd families had to be shifted from the area and some more families might have to be moved in the next few days.

An official of the KMRC said the agency would rebuild the damaged structures and it would make arrangements for alternative accommodation for the affected families till their houses are reconstructed.
Firhad Hakim, mayor Kolkata Municipal Corporation, said, “Experts will examine the condition of the soil where the damaged houses are located. If reconstruction of buildings is not possible, the affected families will be rehabilitated to other places in the city.’’ 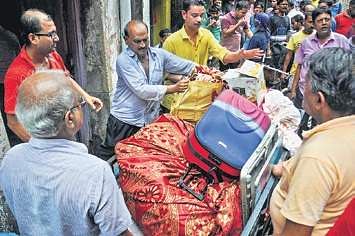 The KMRC has suspended the tunnelling work since Sunday. Two buildings collapsed in past four days while eight others caved in partially. A preliminary investigation by the KMRC revealed the houses started developing the cracks on Sunday afternoon following soil subsidence after the tunnel boring machine of the on-going project hit a water pocket.

Sources in the KMRC said the company assigned the contract to build the tunnel was aware of the mammoth aquifer. “It starts 5 metres under the surface and extends till 24 metres. It is extremely risky to take the tunnel boring machine through the huge water-pocket without proper precautions. The machine gave in after travelling 200 metres because of the water pressure,’’ said an official of the agency. Those managing the work were aware of the risk, said the official.

Now we are on Telegram too. Follow us for updates
TAGS
Kolkata Kolkata Metro project