NEW DELHI: While the Chandrayaan-2 falling short of making a successful lunar surface landing will not be that much of a setback to the moon mission’s scientific purposes, the opinion is divided on its impact on India’s other space exploration missions. Experts feel that ISRO’s proposed 2022 manned mission Gaganyaan may get a bit affected along with plans to land on other planetary bodies, but expressed faith that the agency will put in place several checks and balances keeping in mind involvement of human lives.

ISRO has several ambitious space missions lined up in the next 10 years. On the list are Aditya (Mission to Sun) in 2020, two unmanned space flights in 2020 and 2021, Mission to Venus in 2023 and India’s own space station by 2030. The other plans include manned mission to moon and colonies on moon/mars.

Space technology experts say ISRO is yet to assess the reasons behind the communication loss with the Vikram lander but it is expected to vet all processes for other missions. 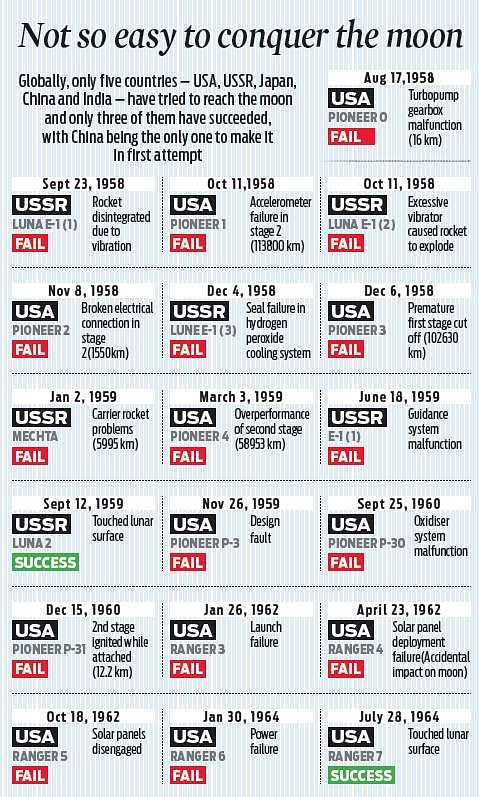 “Aditya is slated for launch next year and there won’t be any impact (of the Chandrayaan setback) on it as it is an orbiter mission like the Mars Orbiter Mission. ISRO’s orbiter missions won’t get affected as no soft-landing is involved. But the Gaganyaan, like the Vikram landing, is a complex mission with critical components to sustain lives in space. I think it may be a bit affected,” said Dibyendu Nandi, professor at the Centre of Excellence in Space Sciences India (CESSI), IISER, Kolkata. CESSI is a co-investigator institution of Aditya-L1 space mission.

READ | From 'all is not lost' to 'a broken dream': Foreign media's mixed reactions to Chandrayaan-2

Nandi says the events related to Chandrayaan-2 will lead to introspection, rechecking processes, vetting software and putting in place checks and balances as we are sending human beings up in the space.In December 2018, the Cabinet had set aside `10,000 crore for the Gaganyaan mission slated for December 2021 launch.

Senior Fellow, IDSA, Group Capt Ajay Lele doesn’t think the setback will impact ISRO’s other missions because Chandrayaan-2 was a deep space exploration mission. “Chandrayaan 2 went for a 4 lakh km voyage while the manned mission plans to take astronauts into space to a height of 400 km. There is a vast difference. ISRO will be extra careful,” said Lele. Some experts feel the glitch may affect India’s plans to land on other planetary bodies, including return to the Moon and to bring back samples but add that it is premature to say with certainty since it’s not yet known what caused the problem with the soft-landing.

“It should not significantly impact the Gaganyaan project as the latter is aimed at taking humans in orbit around Earth and does not involve precision landing which was targeted with Chandrayaan-2 polar landing. However…we need to have reliable life-support throughout the journey and need to master the safe return of the capsule carrying the astronauts back to Earth’s surface,” said Deepak Dhingra, Assistant Professor in the Dept of Earth Sciences at IIT Kanpur, who has been associated with Chandrayaan-1 and Chandrayaan-2 missions.

Now we are on Telegram too. Follow us for updates
TAGS
Chandrayaan 2 Chandrayaan ISRO Vikram lander India space mission