Scavenging Act to be amended

Despite the law prohibiting ‘hazardous cleaning’ of sewer and septic tanks without protective gear and other precautions, workers are employed to clean these tanks.

NEW DELHI:   The Centre is planning to amend The Prohibition of Employment As Manual Scavengers and Their Rehabilitation Act, 2013 to make it more stringent. The amendment is likely to be tabled during the Winter session of Parliament. Despite the law prohibiting ‘hazardous cleaning’ of sewer and septic tanks without protective gear and other precautions, workers are employed to clean these tanks. Sanitation workers continue to lose their lives from suffocation while cleaning the tanks. 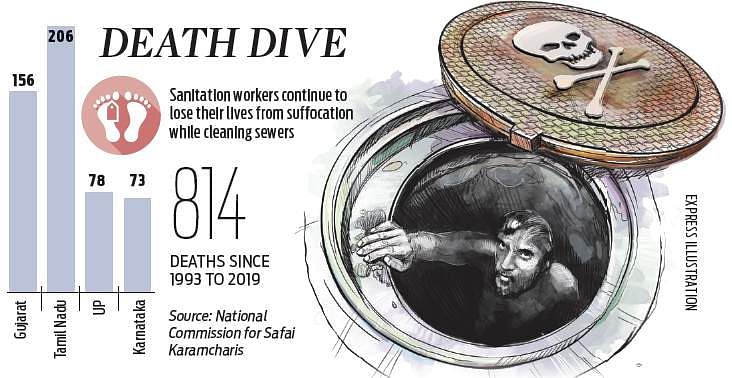 Currently, the Ministry of Social Justice and Empowerment is planning to bring more accountability among officials of civic bodies and private players engaging sanitation workers in hazardous jobs. “The amendment would be aimed at making civic bodies accountable for the deaths of sewer workers. Currently, there is little onus on them. One of the proposals is to make it mandatory for the inspectors of the civic bodies in a given jurisdiction to file an FIR in case of a death,” said a senior ministry official.

Another official pointed out that a significant number of areas remains unsewered across the country.  So it is important to expand the ambit of responsibilities to stakeholders, including households, hotels, eateries in whose premises the work was carried out.

“Currently, we are mostly booking private contractors who employ the workers. Under the amendment, we plan to make more people accountable, including hotels, households, eateries who employed the workers albeit through a private contractor. Because it was in their premises, it would be their duty to ensure people are not engaged for hazardous cleaning,” said the official. The ministry will also involve civil society and other ministries for their inputs on prevention of deaths.

Now we are on Telegram too. Follow us for updates
TAGS
Manual Scavengers