Police sources allege that a lot of Bangladeshi refugees in Gurugram, Nuh and Faridabad districts have been doing odd jobs as daily labourers and domestic help.

CHANDIGARH: There are around seven lakh Bangladeshi refugees who are settled in Gurugram, Nuh and Faridabad districts of Haryana besides a handful of Rohingya immigrants and are working as domestic help or labourers.

Now the BJP government in Haryana wants to implement National Register of Citizens (NRC) on the lines of Assam government so that alleged illegal immigrants can be identified. 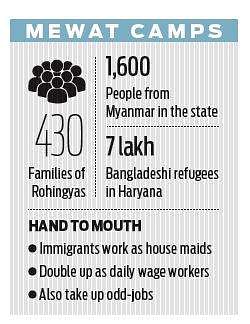 Police sources allege that a lot of Bangladeshi refugees in Gurugram, Nuh and Faridabad districts have been doing odd jobs as daily labourers and domestic help.

Many of them claim that they belong to West Bengal and are working here.

In order to check their credentials, police teams from the state went to West Bengal many times to ascertain their antecedents and the fact came to light that they are actually inhabitants of the enclaves on the India-Bangladesh border.

It is learnt that there are 430 families of Rohingyas comprising of 1,600 people from Myanmar which are settled in Mewat area of the state which is predominately Muslim populated region besides few in Faridabad.

“They had sought refuge in the state, now with the state government planning to implement NRC these immigrants will be identified,” said an official.

As CM Manohar Lal Khattar discussed this issue with the former chairman of the Haryana Human Rights Commission (HHRC) Justice HS Bhalla on Sunday but the finer details are yet to be worked out.

The opposition parties term it as a tactic by the saffron party for a distraction from the real issues which the state is facing.

Sources said that a committee appointed by the Supreme Court to look into the complaints of denial of basic rights and amenities to Rohingya immigrants residing in Mewat camps had told the apex court that Rohingyas were not being discriminated against despite being illegal immigrants, as these migrants have been given the basic facilities of water, sanitation, heath care and education.

Now we are on Telegram too. Follow us for updates
TAGS
NRC BJP NRC in Haryana