Debbarman is the grandson of Bir Bikram Kishore Manikya who had ruled the princely state of Tripura.

The Congress had asked him to withdraw a petition, which he had filed in the Supreme Court last year seeking NRC in Tripura, or resign as the PCC chief.

“I was told by the general secretary to withdraw my case on the NRC or step down as PCC president. I resigned from the primary membership of the party,” Deb Barman, a tribal who belongs to Tripura’s royal family, told this newspaper.

He said he could not compromise “on my indigenous people”. He said he had filed the petition on the NRC 15 months ago and it was not an issue till six months back.

“What changed now is that Rahul Gandhi is no longer there. The so-called young team feels they are completely lost because the old guards have come into the picture,” he said.

Deb Barman said he would not join any other political party or float one.

“I come from a secure background and I am not in politics to make money. I am not going to jump from one party to another. I will keep on my fight on the NRC. Regarding my political future, I will decide as and when the time comes,” he said.

Deb Barman alleged Faleiro was working against him with a few people who were not from the Congress. Slamming him, the tribal leader said the former did not visit Tripura even once since taking over. Therefore, obviously, something fundamentally is wrong with the Congress party, he said.

Faleiro, who was opposed to the NRC in Tripura, had allegedly said that Deb Barman represented only 30 per cent of the population of Tripura. His obvious reference was to the state’s tribals.

After meeting Congress president Sonia Gandhi and other Central leaders in New Delhi last week, Deb Barman had told this newspaper, “I met them as certain things regarding the entire Northeast need to be checked and corrected. I have some views which need to be heard”.

Earlier in the day, in a Facebook post, Debbarman wrote: "Woke up today after a long time feeling relaxed. 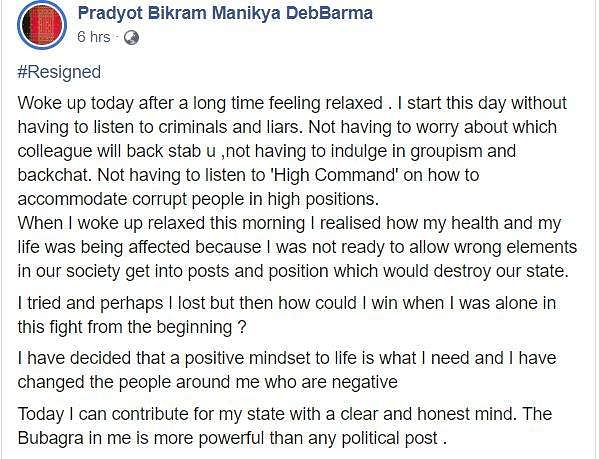 "I realised how my health and my life was being affected because I was not ready to allow wrong elements to get into posts which would destroy our state.

"I tried and perhaps lost but then how could I win when I was alone in this fight from the beginning? The Bubagra (king) in me is more powerful than any political post," he added.