Faced with protests, NIT-Meghalaya to remove Ganesha idol from campus

NIT-Meghalaya director, BB Biswal, told this newspaper that the idol would be removed on Monday as it was hurting the sentiments of some groups of people belonging to other faiths.

GUWAHATI: Faced with protests, the National Institute of Technology, Meghalaya has decided to remove an idol of Lord Ganesha from the campus just seven days after it was installed.

NIT-Meghalaya director, BB Biswal, told this newspaper that the idol would be removed on Monday as it was hurting the sentiments of some groups of people belonging to other faiths.

“The officer-in-charge of a local police station came to the campus two days ago to enquire if there was any objection to the installation of the Ganesha idol. I said the Jaintia Students’ Union (JSU) gave me a letter saying that it hurt the sentiments of people from other religions. We have replied to the JSU saying that since it is hurting the sentiments of some groups of people, we will remove it,” Biswal said.

At the same time, he sought to defend the idol’s installation saying that it had nothing to do with religion.

“We were renovating the office rooms and that portion, where the idol was put, is a common passage and it was very dirty. When we cleaned it up, someone suggested that we put an idol so that nobody makes that portion dirty. That was the idea. Religion had nothing to do with it,” Biswal said.

He said the idol was not being worshipped and that it was kept there for “decorative” purpose. 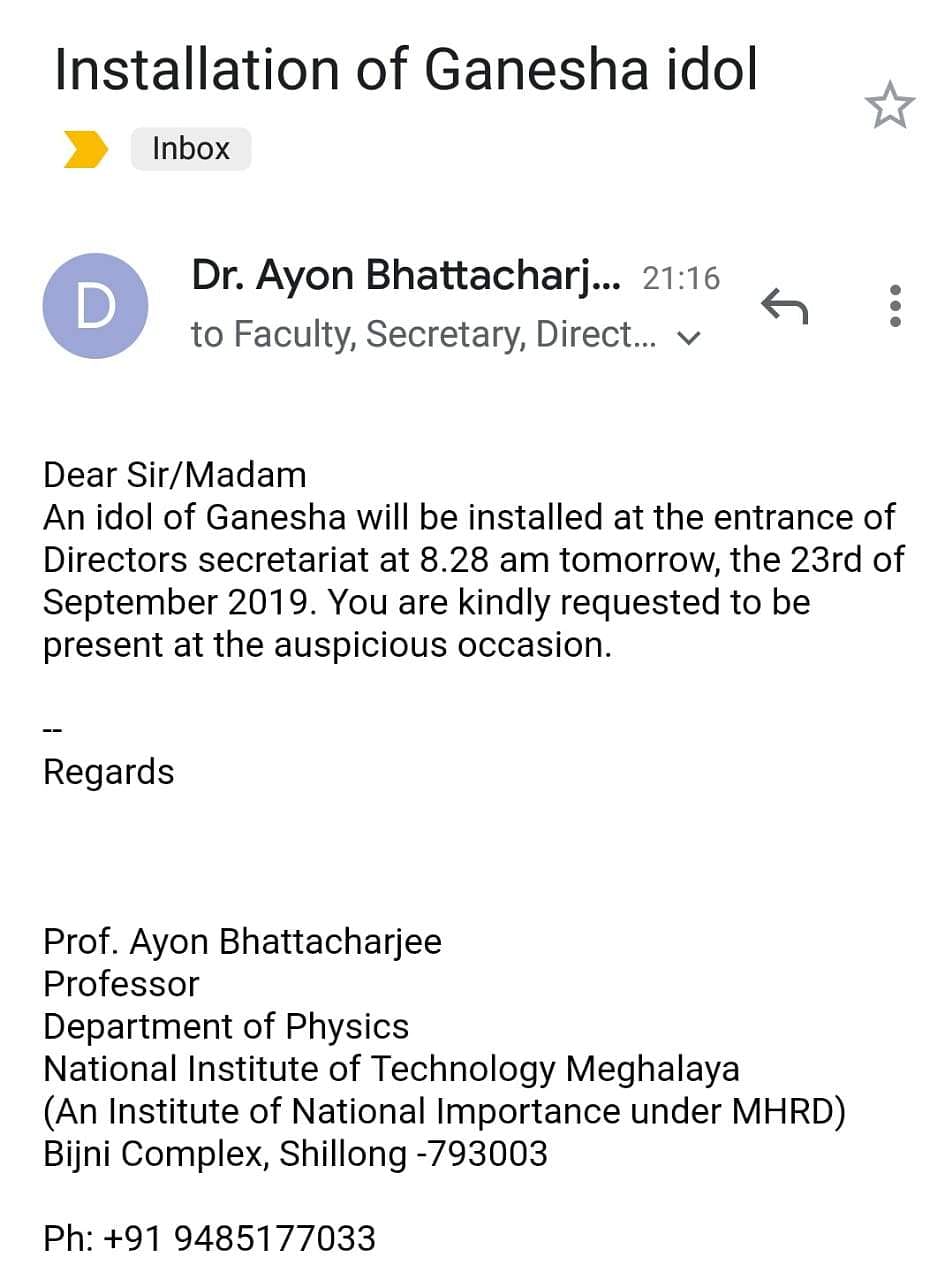 While inviting his colleagues ahead of the idol’s installation, a faculty member of the institute wrote in the invitation letter, “…You are requested to be present at the auspicious occasion”.

The JSU, in a representation to the director submitted on September 26, had warned that the act of the NIT-Meghalaya administration might incite “communal sentiments” among students and staffs belonging to other faiths. It suggested the administration to install the bust of a renowned personality from the field of science, arts or literature in place of the Ganesha idol.

The idol, reportedly carved by a national award-winning sculptor, was installed at the entrance point of Director’s secretariat on Monday much to the chagrin of a section of faculty members. They had warned the director against the plan in order to maintain the institute’s secular fabrics but he went ahead.

Shillong-based activist Agnes Kharshiing was critical of the institute’s act.

“It’s like instigating people. As a director, he should concentrate on education for which he is there and not incite enmity and hatred among communities,” Kharshiing said.

Now we are on Telegram too. Follow us for updates
TAGS
NIT-Meghalaya National Institute of Technology Lord Ganesha