According to Delhi government, the gathering was a "violation" of its order.

NEW DELHI: As the Nizamuddin Markaz turns out to be a epicentre of coronavirus spread not only in the city but also across country, authorities have started blame game regarding the same.

The Markaz building, which is the international headquarters of 'Tablighi Jamaat' from around last 100 years, continued to house about 2,000 people from different parts of the country and world despite several orders issued by Delhi Health Department.

First order was issued on March 13 which said "all sports gathering, including IPL, conferences and seminars beyond 200 people are prohibited in Delhi for the purpose of prevention and control of the outbreak of epidemic disease namely COVID-19." 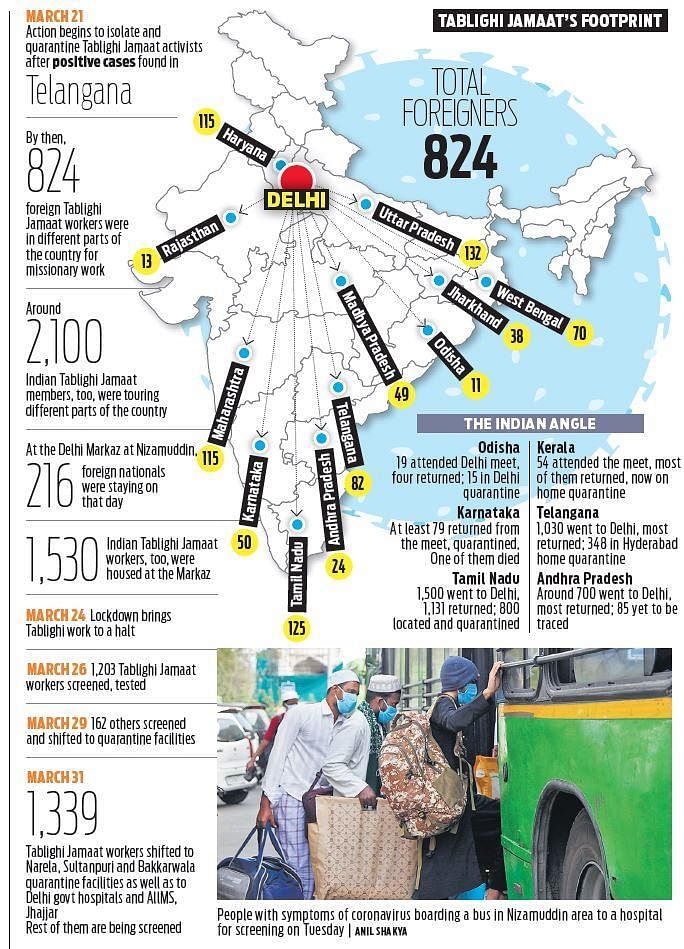 Since the March 13 order had no mention of religious gathering, another order was issued on March 16 which said "Any gathering -- social, cultural, political, religious, academic, sports, seminar, conference and family mass gathering, except marriage, is restricted to a maximum of 50 persons in Delhi till March 31."

Three days later, on March 19, the government barred gathering of 20 people for any purpose, including religious and on March 21, the gathering cap was for five people.

About the programme, the Nizamuddin Markaz said: "All such programmes are planned in advance as visitors, guests, devotees and worshipers from across the globe need to plan their participation. These programmes last for not more than 3-5 days."

However, the ongoing programme was discontinued immediately after the 'Janata Curfew' on March 22 was announced by Prime Minister Narendra Modi, the body further said.

"A large group of visitors who had to depart through trains got stuck in the premises due to sudden cancellation of rail services across the country on March 21," the body said.

However, the Markaz did not comment on the gathering of so many people in the building despite the government order barring the gathering.

While the Aam Aadmi Party and its government blamed the police for inaction, the area Councillor blamed the Centre for the same.

Questioning the police for inaction, Aam Aadmi Party MLA Amantullah Khan tweeted in Hindi, "On March 23, at 12 p.m. I told the DCP South East and ACP Nizamuddin that around 1,000 people are trapped in Nizamuddin Markaz, then why did the police not arrange to send them."

On the other hand, Daryaganj Councillor Yasmin Kidwai blamed the BJP-led Centre government along with the police. In a series of tweets, she tagged Delhi Chief Minister Arvind Kejriwal and said: "@ArvindKejriwal is turning very very quickly- an FIR should definitely be filed but against an incompetent govt who did a #LockdownWithoutPlan - Why were visas issued to foreigners when the #corona warnings were out. Why did Govt not evacuate them even after"

"The markaz has been in constant touch with the Delhi government and the SDM office --they were under lockdown not holding a congregation. But yes let's move attention from all incompetence and blame people," she tweeted.

According to Delhi government, the gathering was a "violation" of its order.

"Clearly the order was violated of the March 13 order which says the gathering of 200 or more was banned. This calls for criminal action," a government official told IANS.

The official said the Markaz cannot use it as an excuse that they had informed the police. "Doing that after the lockdown was imposed means nothing."

In a series of tweets, AAP MLA Atishi slammed the police for its inaction, even after a police station shares a physical boundaries with the Markaz.

She said when an order is issued prohibiting gatherings of more than 200 people on March 13, "it automatically applies to all gatherings... The police is also as criminally liable as 'Tabhligi Jamaat' for not enforcing those orders."

Why did the 'Talighi Jamaat' let so many people part of such a large gathering despite the March 12 order which said that all people with travel history to COVID-19 affected countries were to be self isolated.

Referring to the statements from the body, she said the 'aiztema' happened much before the dates mentioned in this statement, from March 13 and 15. "On 13th, government issued an order banning any gathering more than 200 people. Why did Markaz not stop the event?" she said.

Demanding strong action against the administrators of the Nizamuddin Markaz she said that it was the job of Delhi Police to enforce the order of Delhi government.

She said the Delhi Police should have stopped them, "since they had full information about the event".

Till now, 24 people have been tested positive in Delhi from the gathering, while 441 were taken to hospitals, 1,447 were taken for quarantine.