FIR filed against them for visa violation; Cabinet secretary tells chief secretaries to trace all who were at Nizamuddin meet

NEW DELHI: On a day when the Uttar Pradesh police lodged as many as 23 FIRs against over 100 foreigners for violating visa rules and participating in Tablighi Jamaat activities, Cabinet Secretary Rajiv Gauba on Wednesday ordered all authorities to be firm in tracing and taking action against the Jamaat workers.

Gauba directed the states and Union Territories to launch on a “war footing” the contact tracing of all participants of Tablighi Jamaat’s Nizamuddin congregation. He also called for intensive tracing of all contacts of the participants.

Given the gravity of the situation, Prime Minister Narendra Modi may also speak to the Chief Ministers on Thursday to take them on board for the uphill task. According to reports, authorities across states have identified over 6,000 people who attended the Nizamuddin congregation.

During a video-conference call with Chief Secretaries and DGPs of all States and Union Territories, the Cabinet Secretary asked State and UT authorities to make sure no religious congregation takes place anywhere in the country. If found, the organisers must be dealt with, with an iron hand.

The country’s senior most bureaucrat also ordered registration of cases against foreign Tablighis for violation of visa norms, according to sources. Gauba shared the roadmap for the intensive contact tracing of Tablighis. “Tracing all the participants of the Nizamuddin Markaz is the top most priority, and the state governments must not lose time,” said a senior government official.

Cash for poor soon
With reports of the poor and vulnerable sections of the society facing hardships in accessing foodgrains, the Cabinet Secretary asked states to implement the PM Garib Kalyan Yojana within the next week. “This will involve large cash transfer to beneficiaries,” officials said 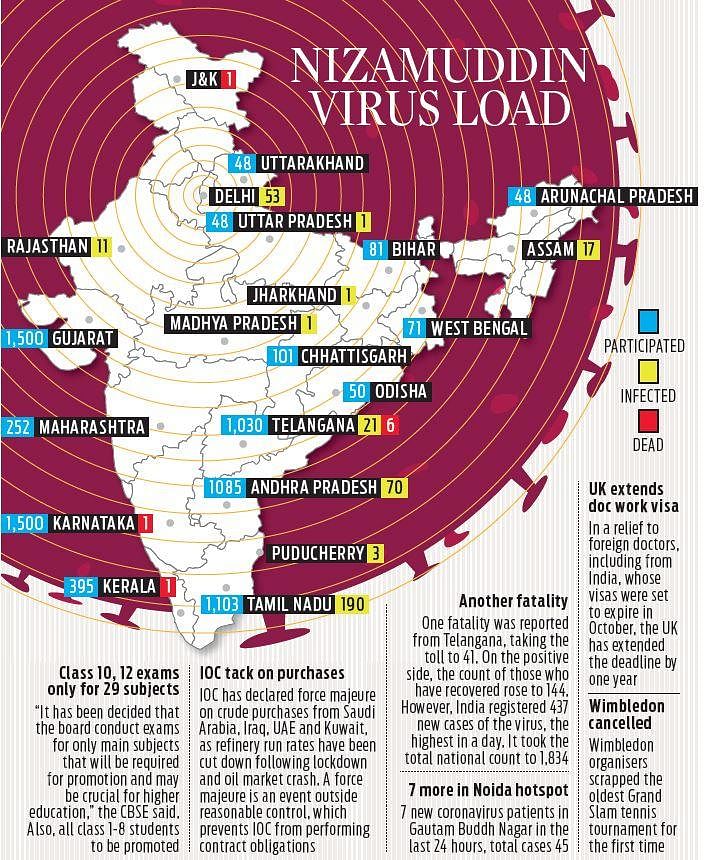