With India’s number of Covid-19 cases only ramping up even as people count down the days for the lockdown to lift, one might presume that at least the kids are having a ball.

With India’s number of COVID-19 cases only ramping up even as people count down the days for the lockdown to lift, one might presume that at least the kids are having a ball. Even if they can’t go out and toss around said ball, at least there’s no school. Coming to the rescue of harangued parents who don’t know what to do with their offspring is Learnflix, a personalized learning app by OG educational publishing powerhouse – S Chand and Co. 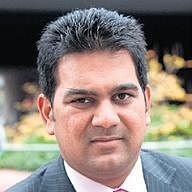 Released on Friday, ahead of schedule, Learnflix is the print giant’s leap to the digital, especially given the mass shut down of educational institutions in India. The app offers Math and Science classes for 6 to 10 graders, based on the CBSE syllabus, while also being of use to students of other state boards. With features like anytime-anywhere learning (including engaging animated videos, quizzes, revision notes and summaries), sample papers, unlimited practice tests with varied difficulty levels, and personalised learning ranging from remedial to advanced lessons, with easy access to all its resources after subscription.

Most notably (pun totally intended), e-versions of notes and textbooks from educational authors such as P S Verma, Manjit Kaur, and others, are available on the app. And yes, it’s been duly tested, with an initial roll out which saw the app being adopted by over 15 schools in India and the Middle East. Speaking about Learnflix, Himanshu Gupta, Managing Director, S Chand Group said, “The app is highly affordable and schools and students even in Tier II and III towns can afford it with ease. Users of online education in India are expected to reach 9.6 million by 2021, and this will be primarily from Tier II and III cities. We are aiming for over one lakh downloads by the end of this year,” he said, adding it is for this reason that Learnflix is competitively priced at Rs1,999 per class per annum (for Classes 6 to 8) and Rs 2,499 per class per annum (for Classes 9 and 10).

Stay up to date on all the latest Nation news with The New Indian Express App. Download now
TAGS
Learnflix coronavirus learning app