MUMBAI: The COVID-19 mortality rate in Maharashtra is higher than that of the country and of the world even as Brihanmumbai Municipal Corporation on Tuesday said community transmission has started in many pockets of Mumbai.

At 869, Maharashtra tops the country in the number of positive cases while a total of 52 people have died. The mortality rate, at 5.98 per cent, is much higher than India’s average of 2.66 per cent while the world average is 5.58 per cent.

In another worrying sign, community transmission has started in Mumbai, according to BMC sources, who said some of the positive cases emerging recently neither have travel history nor were they in immediate contact of those with travel history.

Mumbai has reported a total of 525 positive cases and 34 deaths. In the BMC report, 11 out of the 34 people who died had no history of any ailment.

According to BMC, positive cases are coming in large number from slum pockets and highly dense areas. The largest number of patients is from the fishermen colonies of Worli, Prabhadevi and Lower Parel. Many cases have also been reported from Dharavi, Kurla, Nehru Nagar, Bandra and Andheri.

“The community spread has started and a large number of cases have been reported from various part of the city. We are declaring these areas as contaminated clusters and subsequently sealing them,” said a senior BMC official.

“I have asked to increase the number of ventilators and testing... The situation is under control,” Tope said.

BMC health officer Dr Daksha Shah told The New Indian Express that community transmission is not widespread looking at the population of Mumbai.

Ram Dutonde, spokesperson of BMC, said Mumbai has reported close to 600 cases till 7th April because of four reasons. "The testing capacity has been augmented many fold, there is vigorous contact tracing and special clinics are testing all asymptomatic contacts also, there were more cases in one pocket of Worli and a large number of staff at Wockhardt hospital tested positive after incidental exposure to a COVID-19 case. Besides, Mumbai has a population of 12 million with a high density. However we are monitoring the situation," he said. 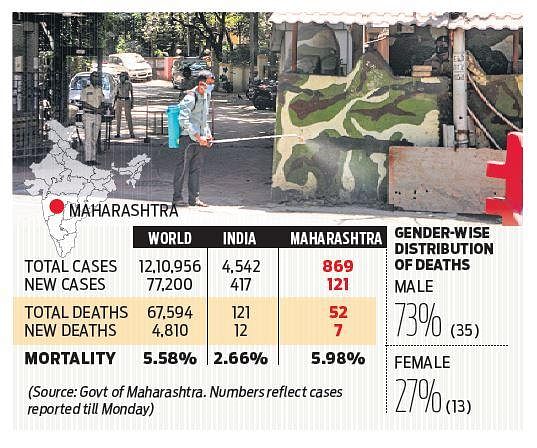 Stay up to date on all the latest Nation news with The New Indian Express App. Download now
TAGS
Coronavirus COVID-19 India lockdown