Lav Agrwal, joint secretary in the Union Ministry of Health and Family Welfare, in the daily briefing on the outbreak said that the core strategy Group on Coovid-19 is working on molecular surveillanc

NEW DELHI:  Even as the number of COVID-19 cases continues to surge in the country, there is a silver lining: 25 districts across 15 states in India have not reported a single case in the last two weeks despite having reported cases earlier.

These include Gondia in Maharashtra; Raj Nandaon, Durg and Bilaspur in Chhattisgarh; Davangiri, Kodagu, Tumkuru and Udupi in Karnataka; South Goa in Goa; Wayanad and Kottayam in Kerala; West Imphal in Manipur. Other districts are Rajouri in Jammu and Kashmir; Aizwal West in Mizoram; Mahe in Puducherry; SBS Nagar in Punjab; Patna, Nalanda and Munger in Bihar; Pratapgarh in Rajasthan; Panipat, Rohtak and Sirsa in Haryana ; Pauri Garhwal in Uttrakhand; and Bhadradari Kothagudem in Telangana.

Lav Agrwal, joint secretary in the Union Ministry of Health and Family Welfare, in the daily briefing on the outbreak said that the core strategy Group on Coovid-19 is working on molecular surveillance, rapid and economical diagnostics and new drugs. The government also said there are enough testing kits as the pace of testing is being raised.“Till Sunday, we conducted 2,06,212 tests. We have enough stock to conduct tests for six weeks,” said Dr R R Gangakhedkar, chief epidemiologist with ICMR. 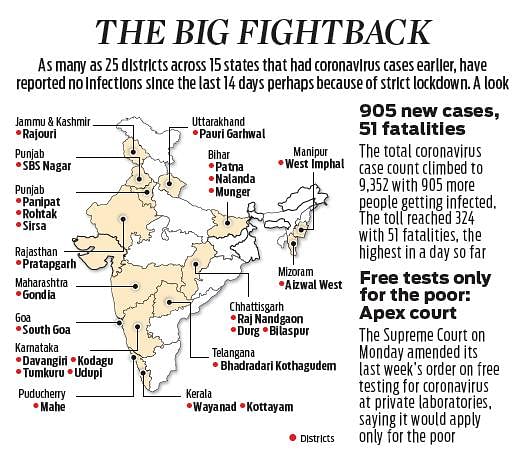 Stay up to date on all the latest Nation news with The New Indian Express App. Download now
TAGS
Coronavirus Coronavirus spread