Northeast people will be more immune to Covid-19, here's why!

'Though the population of the NE region is 3.7% of the Indian population, this region contributed 8 to 12% of malaria positives, 10 to 20% of infections and 13 to 41% of the deaths due to malaria.'

GUWAHATI /NEW DELHI:  As the government struggles to arrest the spread of COVID-19, one part of the country could offer grist to researchers in India and perhaps abroad. The seven states in the Northeast, with 8% of India’s landsize and 3.6% of the total population, not only has a mere 35 confirmed cases of the coronavirus but the rate of local transmission is extremely low, prompting health authorities in the region to believe that perhaps its people are more immune.

About 2,000 people who came in contact with 31 corona patients were tested for COVID- 19, the virus that causes SARS CoV 2, and all of them were found negative. Consider this: Assam has 28 positive cases linked to the Tablighi Jamaat in Delhi. According to Lakshmanan S, Mission Director of the state’s National Health Mission, 1,200-1,300 people who are believed to have come in contact with the 28 Tablighis were tested but all of them were negative. 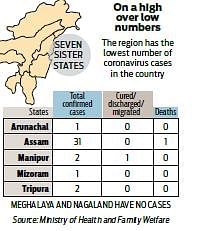 Similarly, about 500 people were tested for the virus after an infected American tourist went on a seven-day cruise on the Brahmaputra river, stayed at a luxury hotel in Guwahati and at a resort in Jorhat next to the Kazaringa sanctuary. But all of them were negative.

In Manipur, 48 people who came in contact with a 23-year-old infected student of Bristol University in the UK have been found negative. Another 29 people were tested for the virus after a Tablighi markaz returnee turned positive but they have also not been infected. In Mizoram, 18 people were tested after a 50-year-old man returned from the Netherlands but all of them were found negative.

While health authorities are convinced that a thorough research is required to study the low number of local cases, they have been left wondering if it is because of higher immunity. “We cannot say we (people in the Northeast) are immune to this disease (COVID-19). But obviously the picture says that the number of cases in the Northeast is less than other states. If there is anything that way, it has to be studied. We need more data for the study,” Lakshmanan said.

But from Lakshmanan to other health officials, all of them believe that the high incidence of malaria and the excessive consumption of hydroxychloroquine could be the reason why people of the Northeast seem to be displaying higher immunity to COVID-19. K Rajo, the Director of Health Services in Manipur, said under the National Malaria Eradication Programme, most doctors prescribe hydroxychloroquine for any fever.

“I wonder if hydroxychloroquine has improved our immunity,” he said. H Lalchungnunga, the Director of Health and Family Welfare of Mizoram, appeared to concur. “The drug could have boosted our immunity. In malaria-prone areas, the picture is completely different as compared to other areas,” he said.

According to a bulletin in the Indian Council of Medical Research, “though the population of the NE region is 3.7% of the Indian population, this region contributed 8 to 12% of malaria positives, 10 to 20% of infections and 13 to 41% of the deaths due to malaria.” As of Monday, the Northeast has 37 active cases: Assam 31, Manipur and Tripura two each, and Arunachal Pradesh and Tripura one each. Meghalaya and Nagaland are so far untouched by the virus.

An ICMR scientist said while the reproduction number of SARS CoV-2 in every state has not been analysed, it could vary significantly across states. “There are a number of variables like geography, weather and biological responses that influence R0 of a virus so it’s possible that the virus will not behave exactly the same way across regions,” he said.

Akash Deep Biswas, a Ph.D scholar who is researching COVID- 19 at Scuola Normale Superiore, a university in Pisa, Italy, said he has not found any direct scientific data that says hydroxychloroquine can inhibit the functioning of SARS CoV 2.

But he said immunity levels are different across the world. “It can be clearly inferred that some parts of India (Northeast India) and some parts of Africa have less cases of COVID-19. The question arises if it is a miracle or is it because of some antibody that has been developed by the bite of anopheles? Did the body develop a special shield for COVID-19 while fighting with plasmodium parasite?” Biswas wondered.