NEW DELHI: The India Meteorological Department (IMD) has come up with a new calendar on onset and withdrawal of the southwest monsoon, especially relevant for agriculture, water and power management, in the country.

The change in schedule followed since 1941 was necessitated keeping in mind the delayed monsoon onset and withdrawal recorded by weather offices in various regions of the country in the last few years.
According to the ‘New Normal Dates of Onset/Progress and Withdrawal of Southwest Monsoon Over India’, monsoon onset over Kerala remains the same on June 1, but the monsoon advance dates over the states like Maharashtra, Gujarat, Madhya Pradesh, Chhattisgarh, Telegana, Andhra Pradesh, Odisha, Jharkhand, Bihar and parts of Uttar Pradesh are delayed by 3-7 days compared to existing normal dates.

“However, over extreme northwest India, the monsoon arrives now little early, July 8, compared to the existing date of July 15. There are, however, appreciable changes in the monsoon withdrawal dates, especially over Northwest and Central India. Monsoon withdraws from NW India almost 7-14 days later from the existing dates. There is no change in the final withdrawal date over south India, October 15,” Ministry of Earth Sciences secretary M Rajeevan said. 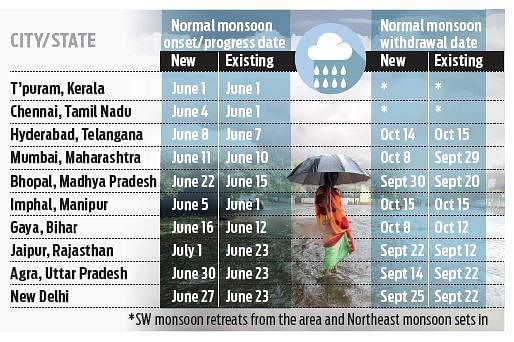 Stay up to date on all the latest Nation news with The New Indian Express App. Download now
TAGS
monsoon tracking