Stranded labourers to be allowed to move within state during lockdown with conditions: MHA

Home Secretary Ajay Bhalla, however, made it clear that there will be no inter-state movement of workers during the lockdown, which has been extended till May 3.

NEW DELHI: A day before labourers are allowed to work in agricultural sector and in certain industries, the government issued guidelines for the movement of stranded migrant workers, clarifying that no inter-state movement of people will be allowed.

“It may be noted that there shall be no movement of labour outside the State/UT from where they are currently located,” the standard operating procedure (SOP) sent by the Union Ministry of Home Affairs (MHA) to states and Union Territories said.

The order issued by Union Home Secretary Ajay Kumar Bhalla asked states and UTs to screen migrants who wish to work and then allow all asymptomatic ones to move within the states to reach their place of work. Bhalla ordered authorities to provide transport facility for work to all asymptomatic migrants.

Ministry of Home Affairs (MHA) issues Standard Operating System for the movement of stranded labourers within the state/union territory - "There shall be no movement of labour outside the state/UT from where they are currently located." pic.twitter.com/qo0UFccp6r

All such workers living in relief camps will have to be registered with the local authorities who have been directed to carry out skill mapping of the migrants to find out suitability of labourers for different kinds of work, according to SOP.

“During the journey by bus it would be ensured that safe social distancing norms are followed and the buses used for transport are sanitized as per the guidelines of the Health authorities The National Directives for COVID-19 Management issued under the consolidated revised guidelines dated 15 April 2020 shall be strictly followed,” the SOP said. 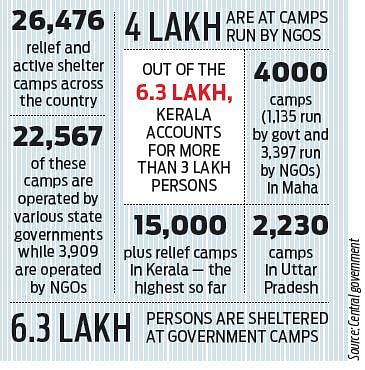 At least 20 lakh migrant workers are reportedly stranded away from their native places, according to estimates of the Labour ministry. They are living in relief camps set up by state government authorities or by their employers in localities where they were clustered before the outbreak of Covid-19.

Reportedly, the number of such stranded workers may be more as the labour ministry, which is mapping details of such workers with the help of district administrations, is yet to receive responses from some states.

The lockdown was first announced by Prime Minister Narendra Modi on March 24 for 21 days in a bid to combat the coronavirus endemic.

While extending the lockdown till May 3, the prime minister declared that select activities will open up from April 20 in areas outside containment zones.

On April 15, the MHA had issued revised guidelines for the second phase of shutdown allowing additional activities like MGNREGA works and construction.​