Experts caution that this may be due to lower number of people being tested in these states.

NEW DELHI: As India grapples to flatten the Covid-19 curve, it has emerged that states, such as Bihar, Chhattisgarh, Himachal Pradesh and Assam, which have performed well in the recovery of positive cases, have scored poorly on health infrastructure.

States such as Bihar, Chhattisgarh, Odisha, Kerala, Himachal, Goa and Assam have seen nearly 50 % of the confirmed cases recuperating. On the contrary, states with better medical infrastructure such as Gujarat, Maharashtra, Delhi, Madhya Pradesh and Andhra Pradesh have a paltry recovery rate of 10%.

However, experts have cautioned that most states showing fewer positive cases and comparatively more recovery have not tested enough and the key lies in scaling up testing. For example, Chhattisgarh had 36 Covid-19 cases, out of which 25 were cured. Chhattisgarh, however, has poor health infrastructure with one doctor for every 4,045 people. Similarly, Odisha has also done well in curbing the spread and recovery of Covid-19 patients. Twenty four people out of 74 positive cases have recovered so far. The doctor–population ratio in the state is a dismal 2,495. The average doctor population ratio in India is 1,445. However, Punjab, Karnataka, Gujarat and Tamil Nadu have a better doctor–population ratio than the country’s average.

Bihar, which has last year seen an onslaught of acute encephalitis syndrome cases, is known to have poor healthcare facilities.  However, it has also performed better than other states with 42 out of 113 patients recovering. On the other side, states such as Gujarat, Tamil Nadu, Karnataka, Delhi, Maharashtra, Andhra Pradesh and many others have performed poorly in curbing the spread and curing patients. In Gujarat, which has a doctor–population ratio of 1,248, better than states such as Chhattisgarh and Bihar, have not been able to contain the spread of the virus.

Maharashtra, which is struggling to contain a galloping number of cases with 4,666 infections, has 572 recovered Covid -19 cases. Similarly, Andhra Pradesh has a high number of cases and poor recovery rate. Only 92 out of total of 722 positive cases have recovered as on Tuesday. AP has one of the doctor–population ratio at 659. However, experts have cautioned that the key to getting the correct positive patients lies in testing. “Most states have not tested enough patients and we might not get the actual number of positive cases. Hence, these sates may be showing fewer cases,” said Anup Karan, additional professor at the Indian Institute of Public Health Delhi. 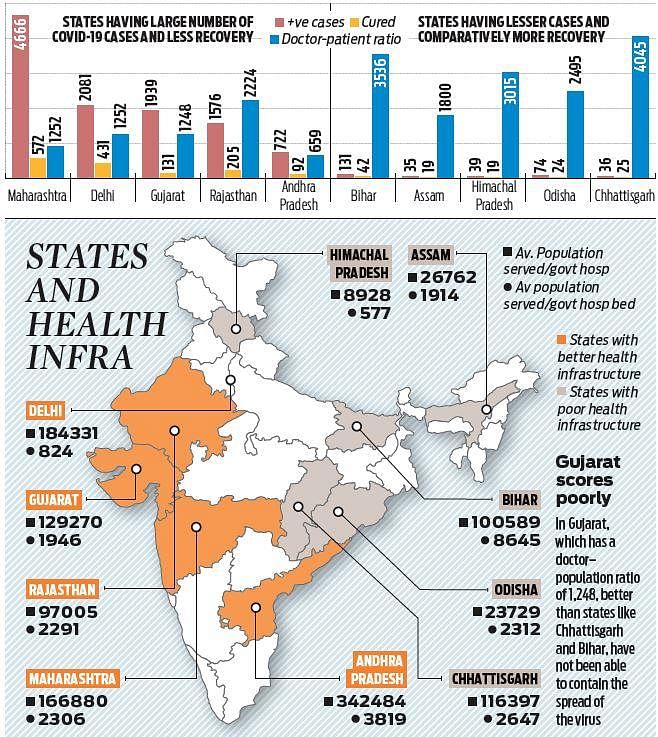