Wheelchair-borne Kaushalya Devi's fight for rights of the differently-abled

Despite 60 per cent disability, Jalandhar’s Kaushalya Devi has been fighting for the rights of the differently-abled and has helped hundreds of such people get their pensions, says Harpreet Bajwa

PUNJAB: Kaushalya Devi was afflicted by polio when she was just three. With 60 percent of her body disabled, Kaushalya would struggle to even climb the staircases of her house. Eventually, she had to take the support of crutches. Despite the hurdles, Kaushalya didn’t give up her goals. Today, Kaushalya, a resident of a small village in Punjab’s Jalandhar, is a well-known crusader for differently-abled. In the last 10 years, the 40-year-old social activist has helped over 800 such people get their pensions.

The wheelchair-borne has also been running campaigns to make people, especially those with speech and hearing impairment, aware of their voting rights in elections. A post-graduate in vocation training for deaf and dumb and a trained ITI instructor, Kaushalya took her first step into social service after her father, Sohan Lal, who was also disabled, introduced her to a friend, Kashmir Singh Sanuwa, in 2008. “I met Kashmir uncle when was just 28. He told me that I should know my rights. 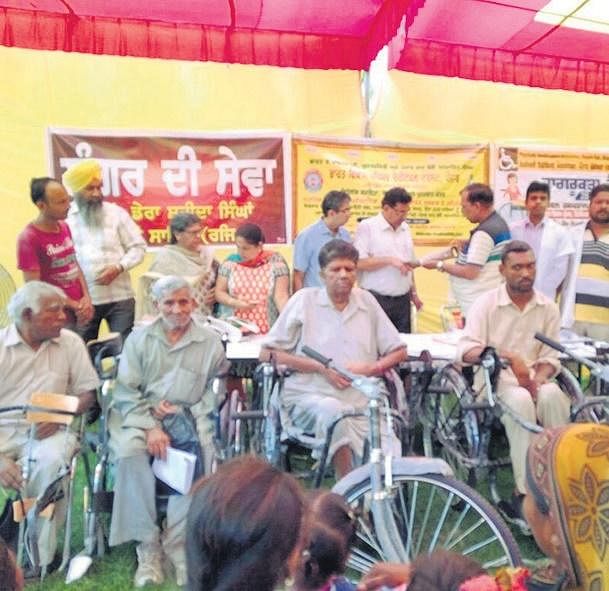 There are certain government provisions for the welfare of disabled people,” says Kaushalya, adding there was hardly any awareness among such people. “In 2010, I joined the Handicap Welfare Association and came to know about the facilities which are being provided to differently-abled people by the government,” she adds. Kaushalya says once her father, who was a teacher, took her to a pingalwara (house for destitute) in their village near Phillaur in Jalandhar.

“I saw children with disabilities doing their work with ease. Seeing them, I also got motivated and since then, I have never complained about my disability,’” she says. Kaushalya did her masters in vocation training to deaf and dumb in 2011 and the next year, she got married to Sufi singer Vijay Mann, who is also disabled. Kaushalya took her first big initiative in 2017 when she held a medical and awareness camp in her area in which more than 250 people had participated. Seeing the success, she organised another camp next year which saw around 300 participations.

“In these camps, I came across three children. Of them, two were deaf and dumb and an 11-year old girl, who had a medical condition. We helped them get operated at a private hospital free of cost,’’ she says. “There were also people who complained to me that they were not getting their social welfare pensions as they were misguided by officials concerned. I fought for them, and within a month, 18 of them received their pensions,” she adds. The social activist receives 15 to 20 phones calls a day for help. Besides, about half a dozen people visit her house every morning with their problems. “We have formed groups of 10 women at our village for social welfare work.

Each of them deposits Rs 100 per month in a bank, and whenever there is a emergency, some amount is given to them,’’ she says. Kaushalya was also the district election coordinator (person with a disability) of Jalandhar during the last Lok Sabha elections. Amarjit Singh Anand, an official of the Punjab State Advisory Board for Disabilities, says: “Despite being a handicap, she was the only member from the district election team who had a 100 per cent auditing record of the polling booths.”

Stay up to date on all the latest Nation news with The New Indian Express App. Download now
TAGS
Kaushalya Devi polio rights of the differently-abled