COVID-19 rapid testing kits from China were not only unreliable but overpriced too?

A legal dispute in the Delhi High Court between the distributor and importer of rapid test kits has exposed purported profiteering and overpricing in kits sold to the Indian government.

NEW DELHI: The Centre on Monday asked states to return the COVID-19 rapid antibody testing kits distributed to them while making it official that the kits, procured from two Chinese companies, have been found to be faulty and the orders are being cancelled.

The development comes even as a massive controversy has broken out over the pricing at which the ICMR under the Union Ministry of Health and Family Welfare had struck the deal to procure 5.5 lakh kits, meant to test the presence of antibodies for novel coronavirus, from the Chinese firms at Rs 600 each.

“Several states have procured rapid antibody kits and on their demand, ICMR has also provided these kits with clear instructions that they are to be used only for surveillance purposes,” a letter issued by the ICMR to states said. 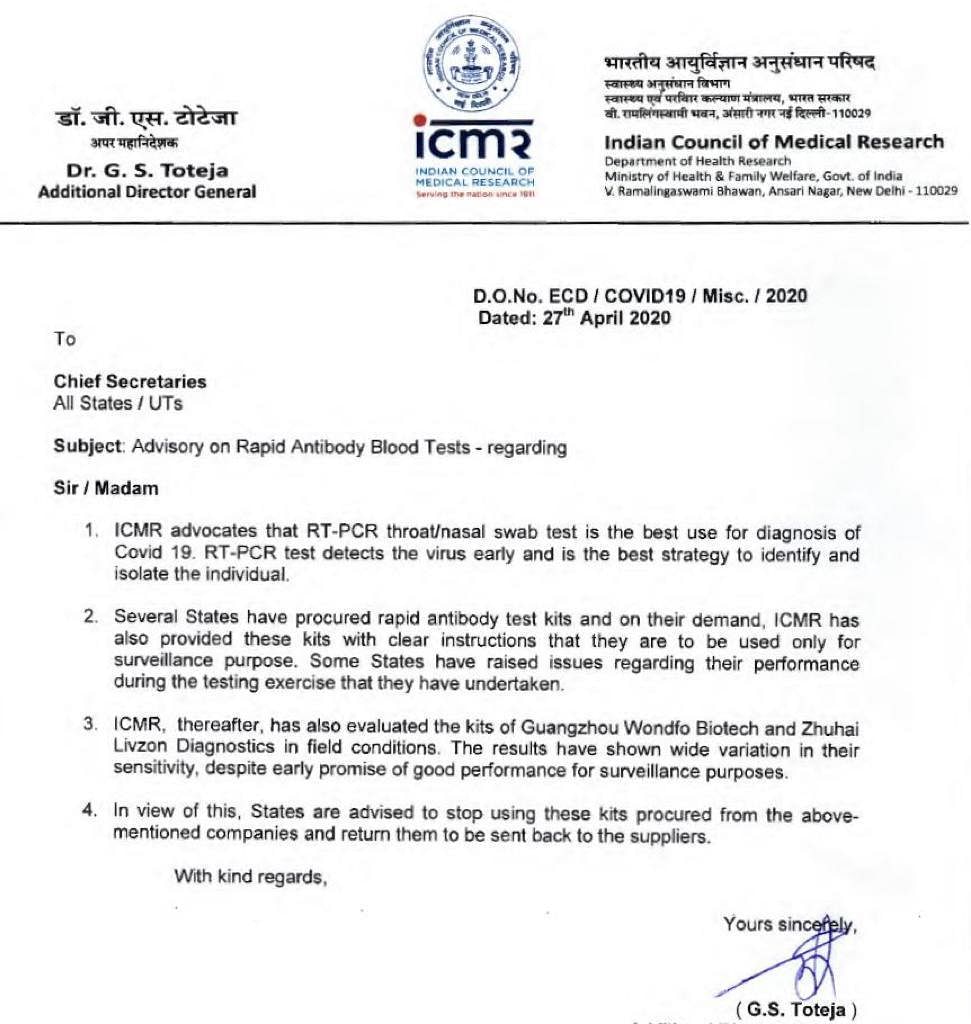 “Some states have raised issues regarding their performance during the testing exercise that they have undertaken. ICMR thereafter has also evaluated the kits from Guangzhou Wondfo and Livzon in field conditions. The results have shown wide variation in their sensitivity despite early promise of good performance for surveillance purposes,” it added, asking states to stop using them and return them.

A legal dispute in the Delhi High Court between the distributor and importer of rapid test kits also exposed purported profiteering and overpricing in kits sold to the Indian government.

Observing that 61 per cent mark-up on such test kits is on the "higher side" but "more than sufficient", the Court disallowed a 145 per cent profit from landed price of Rs 245 to ICMR's purchase price of Rs 600 per test and slashed it to Rs 400 per kit.

The health ministry in a detailed clarification on Monday said that while ICMR’S first attempt to procure these kits did not elicit any response from the suppliers, its second attempt got adequate responses.

Of these responses, taking sensitivity and specificity in mind, kits from 2 firms which had international certifications were identified for procurement.

However, the quotation received for direct procurement had certain issues which included free on board quotation without commitment on logistics, 100 per cent direct advance without any guarantees and rates being quoted in US dollars without accounting for fluctuations.

“Hence, it was decided to go with Wondfo’s exclusive distributor for India who quoted an all inclusive price for FOB (logistics) without any clause for advance,” said the statement.

The Centre also said that that this was the first ever effort by any Indian agency to procure such kits and the rate quoted by the bidders was the only reference point.

ICMR has not made any payment, said the ministry, adding that the government does not stand to lose a single rupee.