The government has been making a lot of effort to popularise the app after Prime Minister Narendra Modi, in his address to the nation on April 14, requested to people to download and use it.

NEW DELHI: Experts have cautioned people against over-reliance on the government’s Aarogya Setu application (app), a primary contact-tracing tool for the COVID-19 outbreak in the country with over 75 million downloads, saying that it may not be as effective as being projected in the Indian context.

The government has been making a lot of effort to popularise the app after Prime Minister Narendra Modi, in his address to the nation on April 14, requested to people to download and use it on their mobile phones to combat the pandemic.

The call, said official sources, has been a major endorsement to the initiative and has seen a massive spike in downloads ever since.

The app, the government claims acts as a one-stop solution for spreading awareness about the COVID-19, helping self diagnose users, provide latest updates and even to store and display e-pass, but its main task is to trace contacts and create a reliable network for the government to identify potential coronavirus patients. There are other variants of the app too, with more than 30 being tried in several states.

Officials have explained that once a user sets up his/her account on the app, it asks for continuous Bluetooth access and even location data. The app then asks for some basic information that helps build data about the user.

“The information includes age, gender, name, health status and also, asks for the countries that the user has been to in the past few weeks. The app also asks if the user belongs to any one of the exempted categories of professionals. Then, it asks if the user will be willing to volunteer in times of need,” explained an official in the Union Ministry of Health and Family Welfare.

In the next step, comes a self-assessment test where the user is asked about their current health and whether they are showing any of the symptoms of the virus.

The user is also asked if he/she has had any travel history or if the user is a doctor, it asks if he/she is exposed to coronavirus patients. Depending on the response, the app suggests a way forward. In case you’re a doctor, the app will ask if you were exposed to coronavirus patients. Depending on the answers, the app suggests what to do next.

Secretary of the Asia Pacific Association for Medical Informatics Dr Oommen John pointed out that when a user is tested positive or declares symptoms of the disease in the self-assessment survey, it triggers a series of actions, including notifications to others app users who have been in contact.

“While this is an extremely innovative approach, It relies on a number of user-initiated actions, and if there are any gaps in users’ understanding of the standard operating procedures, the intended function will be compromised,” he said.

He also said the collection of personal details for registering such apps might be counterproductive in the context of the stigma associated with the disease.

A senior executive with the WHO in India said the most vulnerable people — those above 60 — are least likely to use the tool, and that can be a major shortcoming of the initiative.

“That’s why I am warning against relying on it as a major way of contact tracing,” he said.

Dheeraj Sanghi, an expert in IT and director of the Punjab Engineering College, said the app should be more user-friendly.

“Not everyone keeps the Bluetooth or GPS on, so the app should send a notification to switch it on when someone is moving out of the home and likely to come close to others,” he suggested. 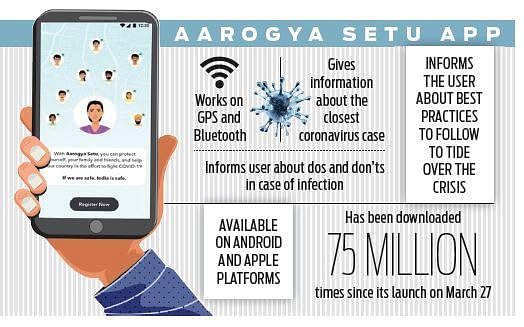