Cities south of the Vindhyas like Chennai, Hyderabad and Bengaluru have seen a significantly higher jump in cases than those in the North like Delhi and Jaipur.

NEW DELHI: A look at the rise in coronavirus cases in hotspot districts across India till April 26 — ever since 170 were officially identified on April 15 — throws up some interesting trends.

The basket of 170 grew a tad bigger as states and Union Territories like Jammu and Kashmir and Delhi added a few districts to the list. While J&K added two districts, Delhi, too, inserted two, in effect covering the entire city.

Needless to say, the hotspots are the priority areas to contain the spread of the coronavirus, with the states employing tough measures in addition to the ongoing lockdown, like clamping curfew, to deal with the violations.

Cities south of the Vindhyas like Chennai, Hyderabad and Bengaluru have seen a significantly higher jump in cases than those in the North like Delhi and Jaipur. However, cities in Bihar like Patna, Munger and Nalanda have registered a huge spike in cases.

Also, the recovery percentage in the South is significantly higher than in the North.

For instance, in Chennai, the cases between April 15 and April 26 grew at a rate of over 140 per cent while in Hyderabad the jump was relatively slower at 86 per cent. The jump in Mumbai was drastic at over 166 per cent. Bengaluru saw the cases rise by 87 per cent during the period. Central India cities like Bhopal (148 per cent) and Indore (116 per cent) witnessed a similar rise. In contrast, cities in the North saw cases rise less fast.

Experts say the role of state governments is instrumental in containing the virus.

“The effectiveness of the lockdown implementation is a determining factor for this. Also, governments in the north have taken a proactive approach as compared to the reactive approach from the southern governments. However, states like Telangana have started becoming proactive now and thus we can expect a decrease in the growth rate,” a leading virologist in Hyderabad said.

In districts which house major cities like Chennai, Mumbai, Bengaluru, Hyderabad, Indore and Bhopal, the number of cases has gone up exponentially. For instance, the number of cases in Mumbai on April 16 was 1,896 while it jumped to over 5,400 by April 26. Similar is the case with Chennai which had 214 cases as of April 16 which more than doubled to 523 on April 26.

While cities like Chennai, Hyderabad, Delhi, Indore, Bhopal, Mumbai, Pune, Bengaluru, Jaipur and others saw an exponential rise in numbers, smaller cities saw a lesser increase. Experts say the number of deaths is higher in big cities because of greater population density.

“If you look at the population density of these cities, it is far greater than those of the smaller cities. Coronavirus being highly contagious is aided by this,” a population studies researcher from the Tata Institute of Social Sciences, Mumbai, said.

“Big cities like Mumbai also have a large number of people with a history of international travel. For instance, Mumbai is an island city, therefore, people are crammed and social distancing is difficult, resulting in the speedy transmission of virus,” he said.

The growth in the number of cases as well as deaths seems to have subsided after April 21, nearly a month after the lockdown was enforced. For instance, in Aurangabad, the average growth rate from April 15 to April 21 was 25 per cent, which slowed to 1.2 per cent after April 21.

The number of deaths in the corresponding periods also shows the same trends.

The analysis also shows that while there has been a steady rise in cases across the country during this period, the number of deaths have been on the decline. Dr Daksha Shah, BMC health chief, said they are testing more people, contact tracing in large numbers, and door to door clinics are major reasons behind rising positive cases, particularly in Mumbai and Maharashtra.

Dr Vishal Gangishetty, a Hyderabad based pulmonologist, said as the time period of the infection increases, better health care can be provided to the patients, resulting in less mortality.

“Also, the mortality rate of the infection in India has been low since the beginning. But as time progresses, the quality of healthcare being administered is on the rise,” he said.

(With inputs from Sudhir Suryavanshi in Mumbai, Rajesh Asnani in Jaipur and Rajesh Thakur in Patna) 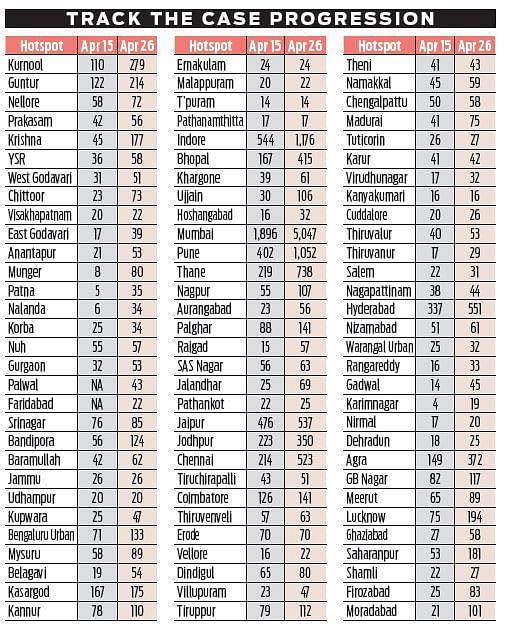