Consider the number of domestic flights in June 2019 and 2020 from some of the other prominent airports.

NEW DELHI:  The Indira Gandhi International Airport in New Delhi, the busiest in the country, operated only 9,335 domestic flights in June this year as against 27,985 flights in the same month last year, a drop of nearly 67%.

The Chhatrapati Shivaji Maharaj International Airport in Mumbai, the second busiest, operated a mere 2,594 domestic flights this June as against 19,682 in the same month in 2019—a drop of 87%. These telling numbers are not restricted only to the two biggest airports in the country.

Official data accessed by this newspaper shows that Covid-19 and the subsequent lockdown have played havoc with the aviation sector, resulting in a sharp fall in the number of flights operated and the number of fliers from airports across the country. 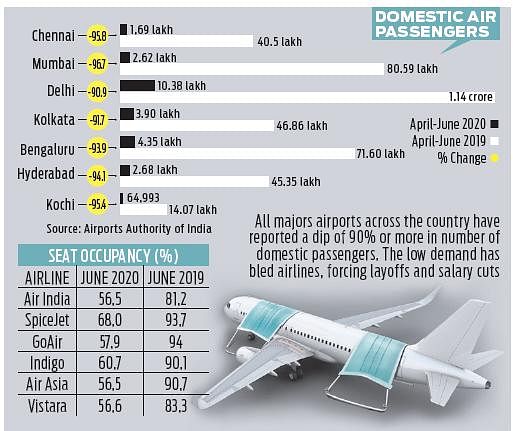 Consider the number of domestic flights in June 2019 and 2020 from some of the other prominent airports. Chennai airport saw a drop of more than 80%, Bengaluru 74%, Hyderabad 71% and Kolkata 61% in-flight operations.

The numbers are grimmer if April-June 2019 and the same period this year are compared. Most airports show a drop of more than 80% (see graphic). The same steep decline in June 2019 and 2020 is seen in the number of domestic passengers handled at all the airports in the country.

In June 2019, the Delhi airport handled more than 40 lakh domestic fliers, but in the same month this year, it came down to 8.82 lakh, a fall of 78%. The story is the same across all airports. Among the major airports that saw a drop of more than 90% are Mumbai, Goa and Mangalore.

It’s not as if the crisis facing the aviation sector is not known. Except for state carrier Air India, which operated the Vande Bharat mission and evacuation flights, the rest were grounded for two months, hitting their balance sheets. But even after domestic flight operations resumed on May 25, all airlines have been fighting to survive owing to record low demand.

The fear of Covid-19 has driven away the fliers, which is reflected in low passenger load. Spicejet had 94% occupancy in June 2019, this came down to 68% in the same month this year. Indigo’s corresponding figures were 90% and 60% while Air Vistara’s were 83% and 57%. The low demand has bled airlines, forcing layoffs and salary cuts.

The sector’s meltdown was also hammered home last week when Indigo, the largest airline, declared its financial results for the quarter ending in June, showing a net loss of Rs 2,844 crore. The government is confident that the aviation sector will see a rebound sooner than later. Union civil aviation minister Hardeep Puri told reporters recently: “We are assuming that by the time Diwali comes this year, we would have 55-60 per cent of pre-COVID domestic flights operating in India.” But airlines, rating agencies and experts don’t share that optimism.

They are unanimous that the sector faces severe headwinds and unless consumer confidence in flying is restored, reviving the industry is an uphill task. “There have been estimations that predict the recovery of the aviation industry. We believe that it may take anywhere between 18 and 24 months to recover from the current situation,” said an Indigo official.

This newspaper sought the views of other airlines also but they did not respond. Former Vayudoot CEO Harshvardhan said it would take four to five years to reach pre-COVID levels. “There are multiple challenges. The biggest problem is that traffic has dropped drastically, there is a fear among travelers. Then there are factors like quarantine rules of different states. I don’t see any normalcy in the sector before 2024 or 2025.” Rating agency Crisil said the plunge in demand will badly impact the financials of airlines.

Its latest report estimates that the aviation industry will see a revenue loss of Rs 24,000–25,000 crore. “Airlines will be the worst affected, contributing more than 70% of the losses, or Rs 17,000 crore, followed by airport operators with Rs 5,000- 5,500 crore and airport retailers, including retail, food and beverages and duty-free outlets with Rs 1,700-1,800 crore,” Crisil said. Another rating agency ICRA said in the last quarter of the current fiscal year, the industry was likely to report degrowth of 3-14% in domestic passenger traffic.

More from Nation
Now we are on Telegram too. Follow us for updates
TAGS
India Airlines India Airports