The sedition charges were contained in three FIRs that SOG had filed which involved the alleged toppling of the Gehlot government.

JAIPUR: Call it a softening of CM Ashok Gehlot’s stance or legal tactic vis-a-vis Sachin Pilot-led Congress rebels; there is much to read into dropping of sedition charges by the Special Operations Group (SOG) over horse-trading of MLAs. The sedition charges were contained in three FIRs that SOG had filed which involved the alleged toppling of the Gehlot government.

Reacting to the SOG move, state BJP chief Satish Poonia said: “The CM’s intention has now been exposed as it is clear that they hatched a conspiracy against their own MLAs to intimidate the Independents and small party MLAs, in the name of SOG and ACB.” The state police’s SOG had originally slapped sedition charges against two rebel Congress MLAs – Bhanwarlal Sharma and Vishvendra Singh – and later against Union minister Gajendra Singh Shekhawat after three audio tapes were leaked in mid-July. 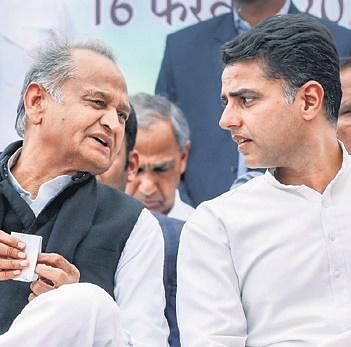 The dropping of the charge, reportedly on legal advice, is being seen as a move to pacify the Pilot camp. Bhanwarlal Sharma, who was named in the FIR, had filed a petition before the Rajasthan High Court to either quash the FIR or transfer it to the NIA. Had the NIA got the case, it would have meant the Gehlot government having little control over the probe.

Experts believe the Gehlot government was worried about the outcome of Sharma’s petition. The possibility of NIA getting hold of the probe weighed heavy on the state government. Sharma’s petition could become infructuous if the sedition charges are dropped.