Centre stingy in ventilator delivery to states amid COVID-19 pandemic

NEW DELHI: Despite the surge in COVID-19 cases, only about 50 per cent of the all the centrally-allocated ventilators, a crucial medical device that aid patients in advanced stages of illness, have been delivered to states across the country.

An RTI reply received by this newspaper from the Ministry of Health and Family Welfare has disclosed that of the 17,968 ventilators allocated to states till July 10, only 9,150 instruments had been delivered.

At only 6 per cent, Andhra Pradesh led the states with the least number of ventilators being delivered. The other states with low numbers are Madhya Pradesh and Tamil Nadu, at 11 per cent and 17 per cent respectively. Sikkim and Lakshadweep didn’t get a single ventilator, but both have low case loads.

ALSO READ| 96 per cent of 60,000 ventilators being procured are indigenous: Health Ministry

According to the RTI reply, the ministry had ordered 30,000 ventilators from Bharat Electronics for Rs 1,513.92 crore, with the purchase order being made on April 4. Additionally, HLL Lifecare limited, a central procurement agency, had ordered 28,850 ventilators.

When the pandemic broke out and there was a fear of ventilator shortage, the Centre decided it would allocate the device to the states under the PM Cares Fund free of cost. It placed orders for the ventilators with fours consortiums or individual firms: Bharat Electronic Limited and SkanRay, Agva and Maruti, AMTZ, an Andhra Pradesh government initiative, and the Allied Medical Limited.

But since then there has been a glut and the Centre has delayed in picking up the orders, industry sources said, prompting a sense of betrayal among manufacturers. The Allied group has manufactured the most expensive device, costing about Rs 7-10 lakh a piece. Most other ventilators bought by the government cost about Rs 1.5-5 lakh each.

"We are now manufacturing 3,000 machines every month, as urged by the government but it is not picking up the device to supply to states," said Vinod Kohli, the director of the Allied group. Rajiv Nath, Forum Coordinator of the Association of Indian Medical Device Industry, said the industry had responded to a national emergency call to manufacture low cost ventilators.

There were eight manufacturers making 3,360 of these devices earlier while 17 manufacturers are now in the game with a capacity to produce 4.27 lakh annually. "There is an inventory of about 50,000 ventilators lying untouched and the industry is now under a lot of stress. The government has not kept its promise of picking the inventory," he said.

A query to the Ministry of Health and Family Welfare has remained unanswered. But relief seems to be in sight for the manufacturers, with the government removing the export ban last week. 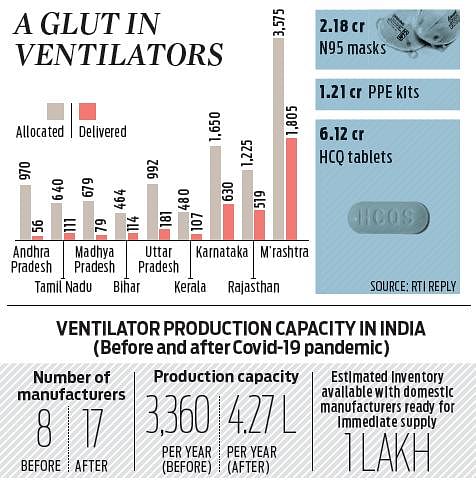 More from Nation.
Now we are on Telegram too. Follow us for updates
TAGS
COVID19 Coronavirus Ventilators Ventilators shortage Ministry of Health