NEW DELHI:  Lockdowns and containment zones in at least a dozen states haven’t made a substantial difference in the fight against Covid-19.

An analysis of data shows that these states are slipping on three distinct parameters — growth rate (the rate at which infections grow), doubling time (the time for the total infections to double) and positivity rate (percentage of people, out of the number of people tested, who are found positive) — during Unlock 2.0 in July.

Andhra Pradesh, Karnataka, Uttar Pradesh, West Bengal, Bihar, Kerala, Madhya Pradesh, Jharkhand and Tripura fared badly in July despite imposing either a complete, partial or mini shutdowns. Rajasthan, Punjab, Chandigarh are the other regions which did badly during Unlock 2.

Public health expert and epidemiologist Jammi N Rao said: “Lockdown delays the spread of the infection. At some point, we will have to unlock and unless we have put in place the means to inhibit the person-to-person spread, the epidemic will resume.”

Oomen John, a public health specialist at The George Institute for Global Health, pointed out that every positive case needs a strong response. 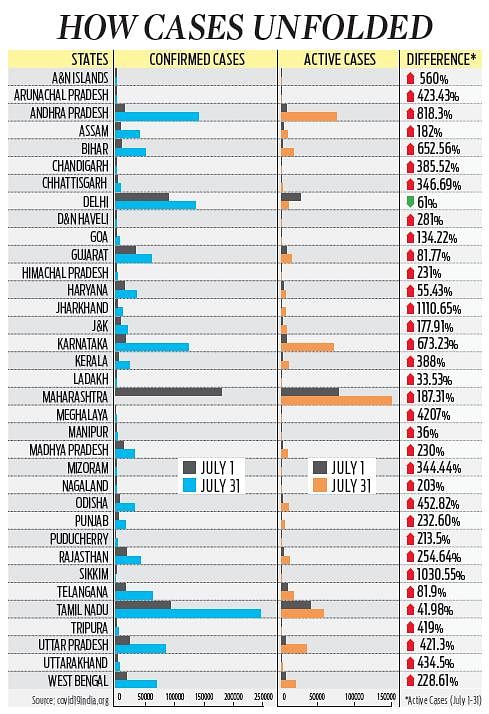 “Some states have ramped up testing while they have also gone for a very strong in-person contact tracing, isolation, containing the points of infection,” said John.

The state has the second highest number of active cases in the country and is placed third in terms of total Covid-19 infections by July 31.

The virus has spread to all 13 districts of the state, reveals data.

While the government ramped up testing by about 111% by July-end, a steady eightfold increase in the tally of active cases by July 31 as compared to July 1 shows the efforts did not yield dividends.

In the all-India tally of both active and new cases in June, Karnataka remained on the seventh position, but by July-end, the state had the third highest active cases.

In the tally of total infections too, Karnataka climbed to the fifth position. While the tally of daily cases remained under 1,000 for all of June except two days, June 28 and June 29, in July, the state started with a new record almost every other day.

From a total of 16,514 cases on July 1, the state ended with 1,24,115 cases. Following the lockdown, Chief Minister BS Yediyurappa said lockdowns were not effective.

The country’s most populous state went from bad to worse in July and saw an increase in the growth percentage of Covid-19 from 3.50% in June to 4.16% in July.

The northern state also climbed three positions up in the all-India tally of active cases despite introducing weekend lockdowns.

The state ranked ninth in the tally of active cases in June, but moved upwards to the sixth position in July owing to a higher growth and positivity rates.

There was a two-fold increase in the number of active cases. However, the state managed to improve its doubling time significantly from 1.67 days in June to 16.43 in July.

Bihar
(Under complete lockdown since July 16)

Bihar was nowhere near the list of 10 most affected states in June, by July-end, it found itself on 10th position with a total 50,987 cases and at the seventh position in the tally of active cases with 17,038 cases, recording a six-fold increase from July 1 when the state had only 2,320 active cases and 10,204 infections.

The doubling rate reduced from June’s 22 days to 13 days in July. With a spike in the number of cases, Bihar decided to impose a state-wide lockdown. CM Nitish Kumar recently said the state was at threat due to high population density.

Now we are on Telegram too. Follow us for updates
TAGS
Coronavirus COVID-19 India Lockdown