UP, Bihar population to be third highest in world in next 16 years: Government projections

In absolute numbers, UP, which is already the eighth most populous region in the world, is expected to register a population increase from 199 million to 258 million in 2036.

NEW DELHI:  If Uttar Pradesh and Bihar were a country, they would probably be the third most
populated country in the world by 2036.

The government’s latest population projections predict a 30% growth for UP and 42% for Bihar (see graphic 1).

According to internetworldstats.com, a website that compiles the global population statistics and projections, the US, the third most populous country, will have an estimated population of 39.8 crore by 2050 while Brazil will have a population of 232 million (23.2 crore).

As a consequence, the population density will increase from 368 to 463 persons per square km.

The rise in population in the two states could be attributed to the high fertility rates in contrast to many other states, such as those in South India, where, owing to an increasing access to birth control measures and better education, healthcare and professional opportunities, the projected growth rate is only 9%.

Together, the five southern states — Kerala, Karnataka, Andhra Pradesh, Telangana and Tamil Nadu — will see a total increase of only 29 million (2.9 crore) people, which is half the increase that UP alone will see.

The Total Fertility Rates or TFRs (average number of children born to each woman) in 2011 in Uttar Pradesh and Bihar were the highest in the country at 3.5 and 3.7, respectively. 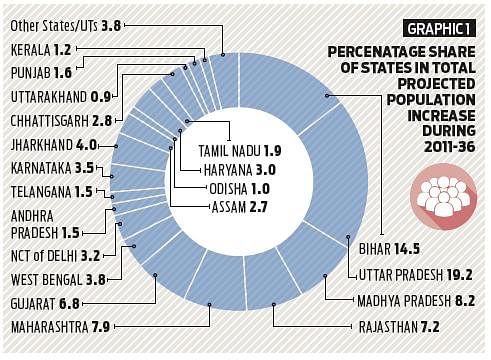 As much as 54% of the growth in India’s population between 2011 and 2036 will take place in the five states of UP, Bihar, Maharashtra, West Bengal and Madhya Pradesh.

In the same period, according to the government data, the country’s TFR will decline to 1.73 with the assumption that the current pace of decline is maintained. According to the report, the only state with a TFR higher than 2 by 2035 will be Bihar at 2.38.

More from Nation.
Now we are on Telegram too. Follow us for updates
TAGS
India Population India Fertility Rate